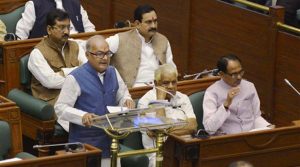 Allocations to the departments of Urban Administration and Development, School Education and Rural Development increased by 22%, 10% and 7% respectively, over the revised estimates of 2016-17. However, allocation to the Department of Energy has decreased by 21%.

Government expenditures can be divided into

revenue expenditure, such as payment of salaries, and

capital outlay, which affects the assets and liabilities of the state.

Irrigation: Rs 9,850 crore is proposed to be spent as capital expenses for irrigation schemes. In addition, Rs 140 crore has been allocated for micro-irrigation.

Rs 50 crore was allocated to increase storage capacity for onions.

A provision of Rs 48 crore has been made for the establishment, management and security of girls’ hostels.

This allocation includes Rs 4,622 crore under the UDAY scheme. A scheme of Rs 4,200 crore is proposed to convert temporary connections into permanent connections.

Rs 2,850 crore has been allocated to the Pradhan Mantri Gram Sadak Yojana (PMGSY).

Rs 1,127 crore has been allocated for the provision of basic amenities to Panchayats.

Urban Development and Environment :  A provision of Rs 600 crore has been made for the Swatchh Bharat Abhiyan.

Revenue deficit: It is the excess of revenue expenditure over revenue receipts. A revenue deficit implies that the recurring receipts of the government are unable to cover its recurring expenditures. The revenue surplus is expected at Rs 4,596 crore (or 0.63% of state GDP) in 2017-18. This is better than the target of eliminating revenue deficit prescribed by the state’s FRBM Act and by the 14th Finance Commission.

Fiscal deficit: It is the excess of total expenditure over total receipts. This gap is filled by borrowings by the government, and leads to an increase in total liabilities of the government. In 2016-17, fiscal deficit increased from the budgeted target of Rs 24,914 crore to Rs 29,899 crore (4.63% of GSDP). This increase includes Rs 7,361 crore taken up as market borrowings on account of the UDAY scheme. The revised estimate in 2016-17 exceeded the 3.0% limit under the 14th Finance Commission, and the 3.5% limit under the FRBM Act. In 2017-18, fiscal deficit is estimated at Rs 25,689 crore (3.49% of GSDP).