Like other parts of India, Madhya Pradesh also has three major seasons – Summer, Monsoon and Winter, but the duration varies. During summer (March-June), the temperature in the entire state ranges above 29.4°C. In general, the eastern parts of Madhya Pradesh are hotter than the western parts. The regions like Gwalior, Morena and Datia record temperature of over 42°C in the month of May. The humidity is relatively very low and the region usually experiences frequent mild dust storms. The south-west Monsoon usually breaks out in mid June and the entire state receive a major share of its rainfall between June and September. The south and south-east regions tend to experience a higher rainfall whereas the parts of north-west receive less. Mandla, Balaghat, Sidhi, Jabalpur and other extreme eastern parts receive more than 150 cm rainfall. The districts of western Madhya Pradesh receive less than 80 cm rainfall. 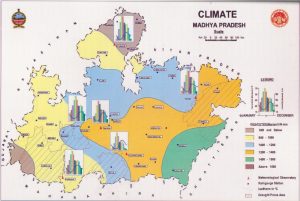 In the state Winters and rainy seasons are very short, while summers are comparatively long. The Tropic of Cancer passes through the middle of Madhya Pradesh. Thus, along with the shifting of the sun towards the northern Hemisphere and the Southern Hemisphere, climatic conditions change on a large scale. The impact of the Great Himalayas takes place extensively throughout Madhya Pradesh particularly during the winters. At the same time, Tropic of Cancer also has a great influence on the climatic conditions of the state.

The state also experiences monsoon rainfall. The winds blow from Bay of Bengal and cover the entire state. The intensity of the rainfall reduces towards the west. The highest rainfall occurs in the extreme east. The maximum rainfall is about 152.4 cm, while the minimum is about 20 to 25 cm. The duration of rainfall also varies. In the last week of June, the monsoon outbreak and reaches the eastern part of the state, while, in the extreme western part, the monsoon reaches in the middle of July. In the western part, during winters, the rainfall occurs due to western disturbances whereas in the eastern part during the similar period, rainfall occurs due to easterlies, the wind blowing from the plain of Siberia. Cities like Jabalpur followed by Rewa district and Sagar experiences maximum rainfall. While Indore, Ratlam district, Gwalior and Bhopal experiences comparatively lower rainfall. Interestingly, the intensity of rainfall is very less in the entire state and most of the districts are drought prone.  Rainy season varies from east to west. In the eastern part of Madhya Pradesh, the first outbreak of monsoon takes place in the mid June, while in the west monsoon reaches up to mid July. Most of the rainfall occurs due the winds blow from Bay of Bengal. Only few part of the western region of Madhya Pradesh rainfall takes place due to the winds blowing from the Arabian Sea. Jhabua district, Dhar district, Khargone, and Rajgarh district receive below 6 cm rainfall. In the hills of Satpura, the average rainfall recorded is 23 cm during the month of August. The state has experienced both flood and drought conditions. Winters are very short. Winters start in the mid November and lasts up to the mid February. Impact of winters is just negligible. Rainfall also occurs during the winters due to western disturbances.

During the winters, when the entire country is swamped by cold waves, the temperature of Madhya Pradesh is regulated by the same waves coming from the Great Himalayas and an average of 15 degree Celsius is recorded throughout the state. The winter season starts from the month of November. The temperature remains low in the northern parts of the state in comparison to the southern parts. The daily maximum temperature in most of the northern part in the month of January remains between 15 and 18°C. The climate is generally dry and pleasant with a clear sky.

Madhya Pradesh has three different climates and is dominated by CSA (Climate-smart agriculture):-

The climate here is mild, and generally warm and temperate. There is more rainfall in the winter than in the summer in Gwalior. The Köppen-Geiger climate classification is Csa. The average temperature in Gwalior is 25.7 °C. In a year, the average rainfall is 910 mm.

The climate here is mild, and generally warm and temperate. In winter, there is much more rainfall in Jabalpur than in summer. This climate is considered to be Csa according to the Köppen-Geiger climate classification. In Jabalpur, the average annual temperature is 24.6 °C. Precipitation here averages 1277 mm.

The climate here is mild, and generally warm and temperate. The winters are rainier than the summers in Sagar. The Köppen-Geiger climate classification is Csa. The average annual temperature in Sagar is 25.2 °C. About 1202 mm of precipitation falls annually.

In Singrauli, the climate is warm and temperate. In winter, there is much less rainfall in Singrauli than in summer. The Köppen-Geiger climate classification is Cwa. The average annual temperature is 24.7 °C in Singrauli. The rainfall here averages 1014 mm.

The climate here is mild, and generally warm and temperate. The rain in Rewa falls mostly in the winter, with relatively little rain in the summer. The Köppen-Geiger climate classification is Csa. The temperature here averages 25.3 °C. The rainfall here averages 1128 mm.

The climate here is tropical. The summers are much rainier than the winters in Indore. This climate is considered to be Aw according to the Köppen-Geiger climate classification. In Indore, the average annual temperature is 24.6 °C. In a year, the average rainfall is 983 mm.

The climate here is tropical. The summers here have a good deal of rainfall, while the winters have very little. The climate here is classified as Aw by the Köppen-Geiger system. The temperature here averages 25.1 °C. About 1132 mm of precipitation falls annually.

The climate is tropical in Dewas. In winter, there is much less rainfall in Dewas than in summer. The Köppen-Geiger climate classification is Aw. The average temperature in Dewas is 24.9 °C. The rainfall here averages 1039 mm.

The climate here is tropical. In winter, there is much less rainfall in Ujjain than in summer. The climate here is classified as Aw by the Köppen-Geiger system. In Ujjain, the average annual temperature is 25.2 °C. Precipitation here averages 892 mm.

Burhanpur’s climate is a local steppe climate. There is not much rainfall in Burhanpur all year long. According to Köppen and Geiger, this climate is classified as BSh. The average annual temperature in Burhanpur is 27.2 °C. The rainfall here averages 812 mm.

The prevailing climate in Bhind is known as a local steppe climate. In Bhind, there is little rainfall throughout the year. According to Köppen and Geiger, this climate is classified as BSh. The temperature here averages 25.9 °C. The rainfall here averages 790 mm.

Khargon is influenced by the local steppe climate. During the year there is little rainfall. This location is classified as BSh by Köppen and Geiger. The average annual temperature in Khargon is 26.8 °C. Precipitation here averages 732 mm.

The climate in Sabalgarh is referred to as a local steppe climate. In Sabalgarh, there is little rainfall throughout the year. This location is classified as BSh by Köppen and Geiger. In Sabalgarh, the average annual temperature is 25.8 °C. About 785 mm of precipitation falls annually.

The prevailing climate in Baroda is known as a local steppe climate. In Baroda, there is little rainfall throughout the year. The climate here is classified as BSh by the Köppen-Geiger system. The average annual temperature in Baroda is 26.0 °C. The rainfall here averages 781 mm.

Note:- Climate-smart agriculture (CSA) may be defined as an approach for transforming and reorienting agricultural development under the new realities of climate change. The most commonly used definition is provided by the Food and Agricultural Organisation of the United Nations (FAO), which defines CSA as “agriculture that sustainably increases productivity, enhances resilience (adaptation), reduces/removes GHGs (mitigation) where possible, and enhances achievement of national food security and development goals”. In this definition, the principal goal of CSA is identified as food security and development. While productivity, adaptation, and mitigation are identified as the three interlinked pillars necessary for achieving this goal.