Madhya Pradesh is located in the center of India. Due to its geographical position it got its nickname as “Heart of India”. Area wise it is the second largest state of India. On Indian map it lies between 21°2′ N to 26°87′ N Latitude and 74°02′ E to 82°48′ E Longitude. The length of Madhya Pradesh from east to west is 870 km and from North to South is 605 km. 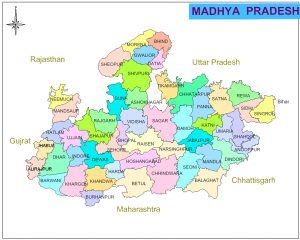 Central Province and Berar with its capital at Nagpur

Baghelkhand
Along with the above, few provinces of certain areas were also included and the name of those areas is:
Chhattisgarh

Madhya Pradesh after Independence
After Independence reorganization of states took place and in this, four parts of states got formed which are mentioned below:
Part A: Central Province and Berar, area of Mahakaushal, Chhattisgarh and Baghelkhand was merged together to form Part A state. Its capital was Nagpur.

Part B: The Madhya Bharat state was defined as Part B and its capital was Gwalior for 6 months and for other 6 months its Indore.

Part C: Vidhya Prant was defined as Part C and its capital was Rewa.

Bhopal: Bhopal was created as a separate state.

Declaration of Madhya Pradesh as a new state
On 9th December 1953 a Reorganization Committee was formed, its Chairmen were:
Justice Fazal Ali Khan

On 1st November 1956 on the bases of language Madhya Pradesh State came into existence due to the recommendation of Justice Fazal Ali Khan committee. Madhya Pradesh was created by letting in all the previous four parts, but certain changes were made within those parts, and the changes were:

Part B: Only Sunel Tappa area of Bhanpura Tehsil (District mandsaur) was given to Rajasthan from this part and rests all the area was as it is.
Part C: Vindhya Prant and Bhopal was completely merged with Madhya Pradesh along with its capital as Bhopal.

Along with the upper changes Sironj Tehsil of Kota district of Rajasthan was incorporated with Vidisha district of Madhya Pradesh.

Journey of Madhya Pradesh to come into its present form.
After all the above changes, on 1st November 1956 Madhya Pradesh have 8 divisions and 43 districts in total, but the process of reorganization were continued. In 1972 two new districts came into existence and they were:

Previously Bhopal was a Tehsil of Sehore. After the addition of two new districts the total districts of Madhya Pradesh become 45.

In 1980 formation of new division i.e Chambal Division took place & from 1980 to 1981 Hoshangabad Division was also incorporated in the list.

On 25th May 1998 V. R. Dubey committee recommended formation of 10 new districts, but due to some regional dispute one more committee got set up which was Singh Deo committee and on its recommendation 6 more districts were formed. So in total 16 new districts got add up in the list and made the count as 61.
Sheopur (Separated from Morena)

On 15th August 2003 three new districts got confirmed and they were:
Ashok Nagar (It got separated from Guna)

Burhanpur (It got separated from Shahdol)

Anuppur (It got separated from Khandwa)

After this confirmation the number of districts raised to 48.

On 17th May 2008 Alirajpur came into existence as a new district after getting separated from Jhabua and on 24th May 2008 Singrauli got separate from Sidhi. After these two separations the total number of districts raised to 50.

At present Madhya Pradesh has total 50 districts and 10 divisions.