The Administration at the State level is the cutting edge of the public administration system in the country. Be it the issue of ration or electoral identity cards, procurement of foodgrains, implementation of employment guarantee schemes, supply of drinking water, mutation of land records, functioning of primary schools and healthcare centres or control of epidemics in the countryside, it is the instrumentalities of the State and District administration with which citizens have to interact.

The administrative structure of Executive Government is “the framework within which the permanent civil service operates under the supervision, control and direction of the political executive coordinating the different parts of the machinery and interacting with other Government agencies and the world outside Government” (UNDP – Civil Service Reforms). Machinery changes are often brought in based on an expectation that better structures will produce better results. Adhoc structural reforms in some countries till the early 1990s had relied more on “legislative changes superimposed on outdated organizational structure rather than based on an in-depth analysis of structural problems themselves”. Now there is a holistic approach to such reform through functional reviews which seeks to balance “a focus on internal reform with a concern for changing relations between public administration and society” (UNDP Public Administration Reforms) with primary functions of redefining roles, missions and functions of different layers of administration, identifying redundancy and duplication of functions, new functions and the 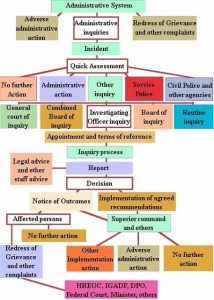 possibility of rationalizing functions that need to be continued, backed by a statutory framework and staff appropriate to the new roles and functions with requisite levers of horizontal and vertical coordination. Structures can be rationalized to create strategic mechanisms and processes for policy and decision making coordination. It has to be borne in mind however that mere structural reform is not a panacea for improving public service delivery.

For administrative purposes the district is divided into subdivisions, Tehsils, Parganas or Circle or Ferka and the village is at the lowest level. The sub division is headed by SDO – SDM/ Assistant Collector. He performs revenue as well as law and order functions in his sub divisions. He is a link between the district collector and the tehsildar in revenue matters and DM and the Station Police Officers in law and order matters. Tehsil is the basic unit for purposes of general administration, treasury, land revenue, land records, etc. Tehsil comprises of about 100 villages.

Gram Panchayat elects one Sarpanch and other members.

Powers and responsibilities of Gram Panchayat:

Zila Panchayat Chief of administration is an IAS officer and other members are elected by the Gram Panchayats and Panchayat Samitis.

City (urban) Administration Mahanagar Nigam (Municipal Corporation ): In Metro cities. At present around 88 Nagar Nigam are in operation. From every ward, there is a Sabhashad, elected by the voters, whereas one Mayor elected separately.   Nagar Palika (Municipality) : Cities having more than 1,00,000 population (there are exceptions as the earlier threshold was 20,000, so all those who have a Nagar Palika earlier, sustains it even though their population is below 1,00,000). From every ward, a member is elected whereas Chairman is elected separately.