An “Agro-climatic zone” is a land unit in terms of major climates, suitable for a certain range of crops and cultivars.

With the 329 million hectares of the geographical area the country presents a large number of complex agro-climatic situations. 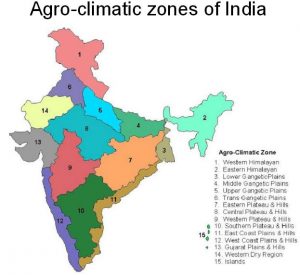 The amount of average annual rainfall is 150 cms. Zonal arrangement in vegetation is found with varying height along the hill slopes. Valleys and duns have thick layers of alluvium while hill slopes have thin brown hilly soils.

This region spreads over eastern Bihar, West Bengal and Assam valley. Here average amount of annual rainfall lies between 100 cm-200 cm. Temperature for July month varies from 26°C-41°C and for January month 9°C-24 0C. The region has adequate storage of ground water with high water table. Wells and canals are the main source of irrigation.

The problem of water logging and marshy lands is acute in some parts of the region. Rice is the main crop which at times yields three successive crops (Aman, Aus and Boro) in a year. Jute, maize, potato, and pulses are other important crops. Planning strategies include improvement in rice farming, horticulture (banana, mango and citrus fruits), pisciculture, poultry, livestock, forage production and seed supply. An export processing zone for marine and sea foods needs to be established which should be equipped with modern facilities of freezing, canning, dehydration, and quality control.

It incorporates eastern Uttar Pradesh and Bihar (except Chotanagpur plateau). It is a fertile alluvial plain drained by Ganga River and its tributaries. The average temperature of July month varies from 26°C- 4I°C and that of January month 9°C-24°C.The amount of annual  rainfall lies between 100 cm and 200 cm. The region has vast potential of ground water and surface runoff in the form of perennial rivers which is utilised for irrigation through tube wells, canals and wells. Rice, maize, millets in, kharif, wheat, gram, barley, peas, mustard and potato in rabi are important crops.

This region encompasses central and western parts of Uttar Pradesh. The climate is subhumid continental with July month’s temperature between 26°-41°C, January month’s temperature between 7°- 23°C and average annual rainfall between 75 cm- 150 cm. The soil is sandy loam. It has 131 per cent irrigation intensity and 144 per cent cropping intensity. Canal, tube well and wells are the main source of irrigation. This is an intensive agricultural region where in wheat, rice, sugarcane, millets, maize, gram, barley, oilseeds, pulses and cotton are the main crops.

It comprises the Chotanagpur plateau Rajmahal hills, Chhattisgarh plains and Dandakaranya. The region enjoys 26°C-34°C of temperature in July, 10°C-27° C in January and 80 cm-150 cm of annual rainfall. Soils are red and yellow with occasional patches of laterites and alluviums.

This comprises southern part of Malwa plateau and Deccan plateau (Maharashtra). This is a region of the regard soil with July temperature between 24°C-41 °C, January temperature between 6°C- 23°C and average annual rainfall of 25 cm-75 cm. Net sown areas is 65 per cent and forests occupy only 11 per cent. Only 12.4 per cent area is irrigated. Jowar, cotton, sugarcane, rice, bajra, wheat, gram, pulses, potato, groundnut and oilseeds are the principal crops. The area is known for its oranges, grapes and bananas.

It incorporates southern Maharashtra, Karnataka, western Andhra Pradesh and northern Tamil Nadu. The temperature of July month lies between 26°C to 42°C, that of January month between 13°C-21°C with annual rainfall between 50 cm-100 cm. The climate is semi-arid with only 50 per cent of area cultivated, 81 per cent of dry land farming, and low cropping intensity of 111 per cent. Low value cereals and minor millets predominate. Coffee, tea, cardamom and spices are grown along the hilly slopes of Karnataka plateau.

This region includes the Coromandel and Northern Circar coasts. Here climate is sub-humid maritime with May and January temperatures ranging from 26°C-32°C and 20°C-29°C  respectively and annual rainfall of 75 cm-150 cm. The soils are alluvial, loam and clay facing the menacing problem of alkalinity.

This region extends over the Malabar and Konkan coasts and the Sahyadris and is covered by laterite and coastal alluvials. This is a humid region with annual rainfall above 200 cm and average temperatures of 26°C-32°C in July and 19°C-28°C in January. Rice, coconut, oilseeds, sugarcane, millets, pulses and cotton are the main crops. The region is also famous for plantation crops and spices which are raised along the hill slopes of the Ghats.

This region extends over the Malabar and Konkan coasts and the Sahyadris and is covered by laterite and coastal alluvials. This is a humid region with annual rainfall above 200 cm and average temperatures of 26°C-32°C in July and 19°C-28°C in January. Rice, coconut, oilseeds, sugarcane, millets, pulses and cotton are the main crops. The region is also famous for plantation crops and spices which are raised along the hill slopes of the Ghats.

Ground water is very deep and often brackish. Famine and drought are common features. Land-man ratio is high. Forest area is only 1.2 per cent. Land under pastures is also low (4.3 per cent). Cultivable waste and fallow lands account for nearly 42 per cent of the geographical area. Net irrigated area is only 6.3 per cent of net sown area which is 44.4 per cent of the geographical area. Bajra, jowar, and moth are main crops of kharif and wheat and gram in rabi. Livestock contributes greatly in desert ecology.

The island region includes Andaman-Nicobar and Lakshadweep which have typically equatorial climate (annual rainfall less than 300 cm the mean July and January temperature of Port Blair being 30°C and 25°C respectively). The soils vary from sandy along the cost to clayey loam in valleys and lower slopes.

The main crops are rice, maize, millets, pulses, areca nut, turmeric and cassava. Nearly half of the area is under coconut. The area is covered with thick forests and agriculture is a backward stage. The main thrust in development should be on crop improvement, water management and fisheries. Improved verity of rice3 seeds should be popularised so as to enable farmers to take two crops of rice in place of one. For fisheries development multi-purpose fishing vessels for deep sea fishing should be introduced, suitable infrastructure for storage and processing of fish should be built up, and brackish water prawn culture should be promoted in the coastal area.