Agro-ecology and its relevance to man

The term agroecology can be used in multiple ways, as a science, as a movement and as a practice. Broadly stated, it is the study of the role of agriculture in the world. Agroecology provides an interdisciplinary framework with which to study the activity of agriculture. In this framework, agriculture does not exist as an isolated entity, but as part of an ecology of contexts. Agroecology draws upon basic ecological principles for its conceptual framework.

Agroecologists study a variety of agroecosystems, and the field of agroecology is not associated with any one particular method of farming, whether it be organic, conventional, intensive or extensive. Furthermore, it is not defined by certain management practices, such as the use of natural enemies in place of insecticides, or polyculture in place of monoculture.

Additionally, agroecologists do not unanimously oppose technology or inputs in agriculture but instead assess how, when, and if technology can be used in conjunction with natural, social and human assets[2]. Agroecology proposes a context- or site-specific manner of studying agroecosystems, and as such, it recognizes that there is no universal formula or recipe for the success and maximum well-being of an agroecosystem.

After the 1970s, when agronomists saw the value of ecology and ecologists began to use the agricultural systems as study plots, studies in agroecology grew more rapidly. Gliessman describes that the innovative work of Prof. Efraim Hernandez X., who developed research based on indigenous systems of knowledge in Mexico, led to education programs in agroecology. In 1977 Prof. Efraim Hernandez X. explained that modern agricultural systems had lost their ecological foundation when socio-economic factors became the only driving force in the food system. The acknowledgement that the socio-economic interactions are indeed one of the fundamental components of any agroecosystems came to light in 1982, with the article Agroecologia del Tropico Americano by Montaldo. The author argues that the socio-economic context cannot be separated from the agricultural systems when designing agricultural practices.

To arrive at a point of view about a particular way of farming, an agroecologist would first seek to understand the contexts in which the farm(s) is(are) involved. Each farm may be inserted in a unique combination of factors or contexts. Each farmer may have their own premises about the meanings of an agricultural endeavor, and these meanings might be different from those of agroecologists. Generally, farmers seek a configuration that is viable in multiple contexts, such as family, financial, technical, political, logistical, market, environmental, spiritual. Agroecologists want to understand the behavior of those who seek livelihoods from plant and animal increase, acknowledging the organization and planning that is required to run a farm. 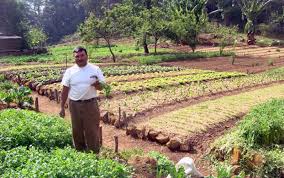 Because organic agriculture proclaims to sustain the health of soils, ecosystems, and people, it has much in common with Agroecology, this does not mean that Agroecology is synonymous with organic agriculture, nor that Agroecology views organic farming as the ‘right’ way of farming. Also, it is important to point out that there are large differences in organic standards among countries and certifying agencies.  Three of the main areas that agroecologists would look at in farms, would be: the environmental impacts, animal welfare issues, and the social aspects.

A key component of animal welfare is freedom to perform their innate (natural) behavior, and this is stated in one of the basic principles of organic agriculture. Also, there are other aspects of animal welfare to be considered – such as freedom from hunger, thirst, discomfort, injury, fear, distress, disease and pain. Because organic standards require loose housing systems, adequate bedding, restrictions on the area of slatted floors, a minimum forage proportion in the ruminant diets, and tend to limit stocking densities both on pasture and in housing for dairy cows, they potentially promote good foot and hoof health. Some studies show lower incidence of placenta retention, milk fever, abomasums displacement and other diseases in organic than in conventional dairy herds. However, the level of infections by parasites in organically managed herds is generally higher than in conventional herds.

No-tillage is one of the components of conservation agriculture practices and is considered more environmental friendly than complete tillage. There is a general consensus that no-till can increase soils capacity of acting as a carbon sink, especially when combined with cover crops. No-till can contribute to higher soil organic matter and organic carbon content in soils, though reports of no-effects of no-tillage in organic matter and organic carbon soil contents also exist, depending on environmental and crop conditions. In addition, no-till can indirectly reduce CO2 emissions by decreasing the use of fossil fuels. Most crops can benefit from the practice of no-till, but not all crops are suitable for complete no-till agriculture. Crops that do not perform well when competing with other plants that grow in untilled soil in their early stages can be best grown by using other conservation tillage practices, like a combination of strip-till with no-till areas. Also, crops which harvestable portion grows underground can have better results with strip-tillage,[citation needed] mainly in soils which are hard for plant roots to penetrate into deeper layers to access water and nutrients.

The benefits provided by no-tillage to predators may lead to larger predator populations, which is a good way to control pests (biological control), but also can facilitate predation of the crop itself. In corn crops, for instance, predation by caterpillars can be higher in no-till than in conventional tillage fields.

In places with rigorous winter, untilled soil can take longer to warm and dry in spring, which may delay planting to less ideal dates. Another factor to be considered is that organic residue from the prior year’s crops lying on the surface of untilled fields can provide a favorable environment to pathogens, helping to increase the risk of transmitting diseases to the future crop. And because no-till farming provides good environment for pathogens, insects and weeds, it can lead farmers to a more intensive use of chemicals for pest control. Other disadvantages of no-till include underground rot, low soil temperatures and high moisture.