Soil consists of rock and sediment that has been modified by physical and chemical interaction with organic material and rainwater, over time, to produce a substrate that can support the growth of plants.” Soils are an important natural resource.  They represent the  interface between the lithosphere and the biosphere – as soils provide nutrients for plants.  Soils consist of weathered rock plus organic material that comes from decaying plants and animals.  The same factors that control weathering control soil formation with the exception, that soils also requires the input of organic material as some form of Carbon.

Soils have many different properties, including texture, structure or architecture, water holding capacity and pH (whether the soils are acid or alkaline). These properties combine to make soils useful for a wide range of purposes. Soil properties govern what type of plants grow in a soil or what particular crops grow in a region.

Soil Texture indicates the relative content of particles of various sizes, such as sand, silt and clay in the soil. Texture influences the ease with which soil can be worked, the amount of water and air it holds, and the rate at which water can enter and move through soil. 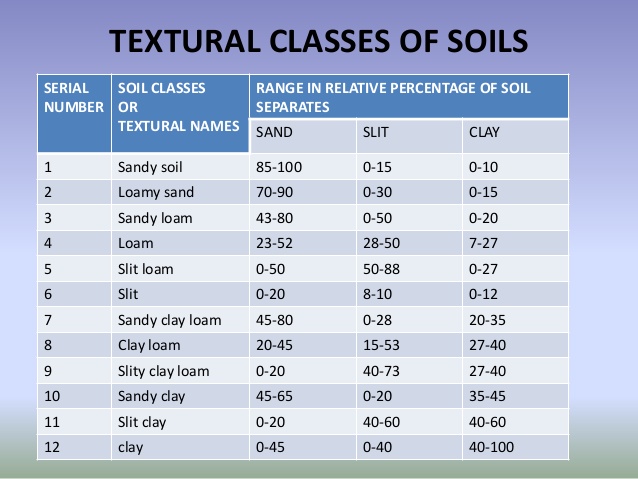 Soil permeability is a broad term used to deﬁne the ability of the soil for transmitting water. It is important to understand the water dynamics and the water balance of the soil and it must be known for accurate management of irrigation . It is determined partly by texture, with sandy soils having high permeability as compared to clay soils and it can be altered by soil management .

Soil structure refers to the arrangement of soil separates into units called soil aggregates. An aggregate possesses solids and pore space. Aggregates are separated by planes of weakness and are dominated by clay particles. Silt and fine sand particles may also be part of an aggregate

There are 5 basic types of structural units:

Nutrient availability and cation exchange capacity
In the soil, a large portion of plant nutrients are bound up in complex compounds that are unavailable to plants. The smaller portion is in simpler, more soluble forms, which are useable by plants. The complex compounds are gradually changed into the simpler compounds by chemical weathering and biological processes. Thus, the chemical fertility of a soil depends in part on how easily the plants can access the nutrients in a form they require. This is referred to as the availability of a nutrient. The availability of nutrients within the soil is also dependent on a range of factors such as soil pH, soil solution, soil type and the plant age, type and root system of the plant.

The pH value of the soil layers which will later make up the dikes and the bottom of your ponds will greatly influence their productivity. In acid water, for example, the growth of microscopic organisms which serve as food for the fish may be greatly reduced. In extreme conditions of acidity or alkalinity, the health of your fish may even be endangered, and their growth and reproduction affected.

For good productive conditions, the pH value of pond soil should be neither too acid nor too alkaline. Preferably, it should be in the range of pH 6.5 to 8.5. Soils with a pH value lower than 5.5 are too acid and soils with a pH value greater than 9.5 are too alkaline. They will both require special management techniques which will considerably increase the costs of fish production. If the soil pH is either lower than 4 or higher than 11, it should be considered unsuitable for the construction of pond dikes or for use as pond bottom.

Soils host a complex web of organisms which can inﬂuence soil evolution and speciﬁc soil physical and chemical properties. For instance earth- worms activity increases inﬁltration rate, or microbial activity decreases soil organic matter due to mineralization. Soil biology plays a vital role in determining many soil characteristics, yet, being a relatively new science, much remains unknown about soil biology and about how the nature of soil is affected. Soil organisms break down organic matter and while doing so make nutrients available for uptake by plants. The nutrients stored in the bodies of soil organisms prevent nutrient loss by leaching. Microbes also maintain soil structure while earthworms are important in bio-turbation in the soil.