Greater travel, rising wealth and greater knowledge of outer world led to a new philosophy of life called renaissance. With rising material consumption, this worldly pleasures took place of Church advocated other worldly pleasure and hence human and not god became center of activities. Thus, humanism was a key feature of renaissance. Individualism and human potential took due place in society.

The classics were revived and a search for knowledge begins. Intellectual inquiry was another facet of renaissance apart from humanism. Invention of printing press played an important role as now books were widely available.

Renaissance began in Italy as it was center of wealth and trade at that time.
It was not only about religion and polity, but also about a state of mind. Humanism was an ideological pillar. Many paintings were secular. It was like a cultural re-birth. Advances were made in field of science, mathematics, physics, literature, painting, sculpture, architecture and astronomy. 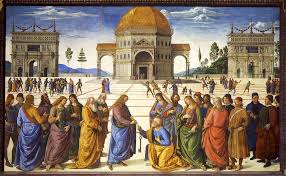 It led to numerous sea voyages and new geographical dicoveries. Direct sea routes were discovered to places like India and it reduced dependecy of the West on Central Asia and West Asia. A new era of world trade was opened. It created hyper-demands and opening of new markets also provided a further push to industrial revolution.

Spirit of nationalism began to evolve with formation of nation-states. Erstwhile feudal societies had small feudal provinces which were driven by narrow concerns and were also not permanent. Evolution of large nation states bred the feeling of nationalism.

American Revolution was perhaps the first manifestation of this feeling. This feeling was also quite evident in France during and after French Revolution. It became contagious in Europe after ideals of French revolution spread in other states.

Nationalism is a modern movement in which loyalty of individuals is not to vested interests, a monarch or political group, but to a nation of people. Earlier loyalties were attached to land (in feudal society), territory and so on.

Impact Of Nationalism On Political Landscape Of 19th Century Europe

First 19th century national revolt was in Serbia in 1804 which led to successful implementation of a nation state in 1817. Then, similar attempts were made by Greece against Ottoman Empire.

It led to toppling of Austrian Hungarian Empire, Romanovs of Russia and Ottoman empire.

Vienna Congress has tried to stifle the tide of nationalism, but it was evident by 1830s that nationalism is unstoppable force. In 1831, Belgium obtained independence from Netherlands. Attempts were also made by Italy, France and Poland as well in 1830s which were, however, suppressed.

Unification of Italy under Mazzini and unification of Germany were strongest manifestations of rising tide of nationalism.

Thus, nationalism broke new grounds by independence of nations from foreign rules and autocratic rules, led to unifications, led to reactionary conflicts from conservatives who wanted to restore old order and so on.

With the emergence of new industrial nationalities in second half of 19 century, a struggle for world resources also emerged. Early colonial powers resisted this attempt. It finally culminated into two world wars.