By 1917, most Russians had lost faith in the leadership ability of Czar Nicholas II. Government corruption was rampant, the Russian economy remained backward, and Nicholas repeatedly dissolved the Duma, the Russian parliament established after the 1905 revolution, when it opposed his will. However, the immediate cause of the February Revolution–the first phase of the Russian Revolution of 1917–was Russia’s disastrous involvement in World War I (1914- 18). Militarily, imperial Russia was no match for industrialized Germany, and Russian casualties were 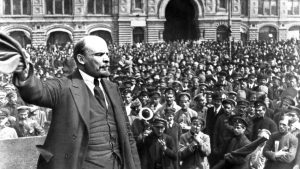 greater than those sustained by any nation in any previous war. Meanwhile, the economy was hopelessly disrupted by the costly war effort, and moderates joined Russian radical elements in calling for the overthrow of the czar.

After Czar Nicholas II and his family were executed by Bolshevik forces in July 1918, the killers hid the victims’ mutilated bodies. The remains were discovered and exhumed in the late 1970s near Yekaterinburg, Russia, and eventually identified through DNA testing.

The February Revolution (known as such because of Russia’s use of the Julian calendar until February 1918) began on March 8, 1917 (or February 23 on the Julian calendar), when demonstrators clamoring for bread took to the streets in the Russian capital of Petrograd (now called St. Petersburg). Supported by huge crowds of striking industrial workers, the protesters clashed with police but refused to leave the streets. On March 10, the strike spread among all of Petrograd’s workers, and irate mobs destroyed police stations. Several factories elected deputies to the Petrograd Soviet, or council, of workers’ committees, following the model devised during the 1905 revolution.

On March 11, the troops of the Petrograd army garrison were called out to quell the uprising. In some encounters, regiments opened fire, killing demonstrators, but the protesters kept to the streets and the troops began to waver. That day, Nicholas again dissolved the Duma. On March 12, the revolution triumphed when regiment after regiment of the Petrograd garrison defected to the cause of the demonstrators. The soldiers subsequently formed committees that elected deputies to the Petrograd Soviet.

The imperial government was forced to resign, and the Duma formed a provisional government that peacefully vied with the Petrograd Soviet for control of the revolution. On March 14, the Petrograd Soviet issued Order No. 1, which instructed Russian soldiers and sailors to obey only those orders that did not conflict with the directives of the Soviet. The next day, March 15, Czar Nicholas II abdicated the throne in favor of his brother Michael (1878- 1918), whose refusal of the crown brought an end to the czarist autocracy.

In the aftermath of the February Revolution, power was shared between the weak provisional government and the Petrograd Soviet. Then, on November 6 and 7, 1917 (or October 24 and 25 on the Julian calendar, which is why this event is also referred to as the October Revolution), leftist revolutionaries led by Bolshevik Party leader Vladimir Lenin launched a nearly bloodless coup d’état against the provisional government. The Bolsheviks and their allies occupied government buildings and other strategic locations in Petrograd, and soon formed a new government with Lenin as its head.

Lenin became the virtual dictator of the first Marxist state in the world. His government made peace with Germany, nationalized industry and distributed land, but beginning in 1918 had to fight a devastating civil war against anti-Bolshevik White Army forces. In 1920, the anti- Bolsheviks were defeated, and in 1922 the Union of Soviet Socialist Republics (USSR) was established

ÿ Russian Revolution had wider impact than on Russia. It marked a beginning of a new political system in form of communism which had profound future impact. Czar dynasty was first to fall followed by fall of German, Austrian and Ottoman Sultans.
ÿ It was the first true revolution by masses and power was truly given in hands of masses which didn’t happen in case of merican and French Revolution.
ÿ Bolshevik-founded Comintern (an international union of pro-Bolshevik socialist parties) which sparked the ideas of communism globally.
ÿ It inspired revolutionaries in many countries including India. Bhagat Singh declared capitalism and colonialism as his biggest enemies.
ÿ It also laid suspicion in the minds of other colonial powers as they saw communism as a threat to the old order and it emerged as one of the causes of WW2. Western powers appeased aggressive nationalist and fascist forces to ward off communism in countries like Germany and Italy which finally led to disastrous effects in form of mother of all wars.
ÿ A process of centralised planning was introduced. Officials assessed how the economy could work and set targets for a five-year period. On this basis they made the Five Year Plans.

However, despite all its claims, the socialism that was envisaged never arrived. People also suffered unforessen hardhship on the name of implementing socialist agenda. Many were sacrificed during collectivizations sprees Many others were exterminated for holding ‘anti- communist/revolution’ views The repressive machinery became even more cruel with the arrival of Stalin and Russia turned into an autocrat state. What followed was Stalin’s collectivisation programme From 1929, the Party forced all peasants to cultivate in collective farms (kolkhoz). Those who resisted collectivisation were severely punished. Many were deported and exiled and were even sent to gulags..