Biotechnology is defined as the industrial application of living organisms and their biological processes such as biochemistry, microbiology, and genetic engineering, in order to make best use of the microorganisms for the benefit of mankind. Modern biotechnology provides breakthrough products and technologies to combat debilitating and rare diseases, reduce our environmental footprint, feed the hungry, use less and cleaner energy, and have safer, cleaner and more efficient industrial manufacturing processes.

Biotechnology began in the 1970s after the development of genetic engineering that allowed scientists to modify the genetic material of living cells. Genetic engineering is the manipulation of DNA molecules to produce modified plants, animals, or other organisms. DNA is the part of a cell that controls the genetic information of an animal or plant. DNA is a double-stranded molecule that is present in every cell of an organism. The genetic information is contained in individual units or sections of DNA called genes. The genes that are passed from parent to offspring determine the traits that the offspring will have.

Development of vaccines and antibiotics : Using technology, microorganisms are used to develop antibiotics and vaccines to cure diseases. For example, bacteria Bacillus polymysea is used to produce polymyxin B (antibiotic used to cure urinary tract infections), fungus Penicillium notatum is used to produce penicillin (used to cure pneumonia, and many other bacterial infections.)

Treating genetic disorders : Disease can occur when genes become defective due to mutations. With advancements in biotechnology, in the near future it will be possible to use gene therapy to replace an abnormal or faulty gene with a normal copy of the same gene. It may be used to treat ailments such as heart disease, inherited diseases such as SCID, and Thalassaemia.

In forensic science : A lot of New techniques have been developed such as DNA fingerprinting, besides having a number of other applications which have facilitated the speedy identification of the criminals.

Cleaning up and managing the environment : Cleaning up the environment using living organisms is called bioremediation. Naturally occurring, as well as genetically modified microorganisms, such as bacteria, fungi and enzymes are used to break down toxic and hazardous substances present in the environment.

Biotechnology has also made possible the production of crops improved disease resistan; herbicide-toleran and insecticide-resistan. Plants with improved nutritional value for livestock have also been obtained through biotechnology.

Control of pests : One application of biotechnology is in the control of insect pests. The genetic make-up of the pest is changed by causing some mutations. These pests become sterile and do not reproduce further.

Manufacturing and bio-processing : With the help of new biological techniques it has become possible to grow, the plants that produce compounds for use in detergents, paints, lubricants and plastics on large scale. 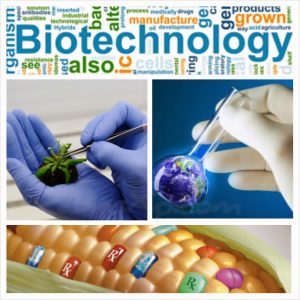 Food and drinks : Biotechnology, has also made the processing of foods and their products easier. Preservation and storing of food for consumption later has become easy and cheap with the help of biotechnology. Seedless grapes and seedless citrus fruits have been developed using biotechnology.

Biotechnology has been used in the industry to produce new products for human consumption. Food additives have been developed which help in the preservation of food. Microorganisms are used in the mass production of items such as cheese, yoghurt, and alcohol.