Work is said to be done when a force applied on the body displaces the body through a certain distance in the direction of force.Mathematically, work is the force-displacement product (for those of you who prefer algebra)

or the force-displacement path integral (for those of you who prefer calculus). 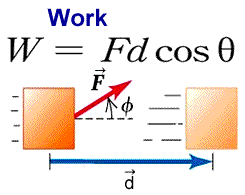 Kinetic energy of an object is the energy that it possesses due to its motion. It is defined as the work needed to accelerate a body of a given mass from rest to its stated velocity.

Power is defined as the rate at which work is done. Its unit is watt Power is said to be one watt, when one joule of work is said to be done in one second.

If work is being done by a machine moving at speed v against a constant force, or resistance, F, then since work done is force times distance, work done per second is Fv, which is the same as power. Power = Fv