The Global Positioning System consists of 24 satellites, that circle the globe once every 12 hours, to provide worldwide position, time and velocity information. GPS makes it possible to precisely identify locations on the earth by measuring distance from the satellites. GPS allows you to record or create locations from places on the earth and help you navigate to and from those places.

GPS satellites circle the Earth twice a day in a precise orbit. Each satellite transmits a unique signal and orbital parameters that allow GPS devices to decode and compute the precise location of the satellite. GPS receivers use this information and trilateration to calculate a user’s exact location. Essentially, the GPS receiver measures the distance to each satellite by the amount of time it takes to receive a transmitted signal. With distance measurements from a few more satellites, the receiver can determine a user’s position.

GPS System has three segments:-
Space Segment
The space segment consists of a nominal constellation of 24 operating satellites that transmit one-way signals that give the current GPS satellite position and time. The space segment consists of 24 satellites circling the earth at 12,000 miles in altitude. This high altitude allows the signals to cover a greater area. The satellites are arranged in their orbits so a GPS receiver on earth can always receive a signal from at least four satellites at any given time.
Control Segment 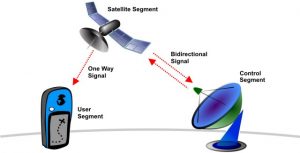 AF flight control officer The control segment consists of worldwide monitor and control stations that maintain the satellites in their proper orbits through occasional command maneuvers, and adjust the satellite clocks. It tracks the GPS satellites, uploads updated navigational data, and maintains health and status of the satellite constellation.
User Segment
receiver The user segment consists of the GPS receiver equipment, which receives the signals from the GPS satellites and uses the transmitted information to calculate the user’s three-dimensional position and time.

GPS Aided Geo Augmentation Navigation (GAGAN) is a planned implementation of Satellite Based Navigation System (SBNS) developed by Airports Authority of India (AAI) and ISRO. GAGAN is expected to provide a civil aeronautical navigation signal consistent with International Civil Aviation Organization (ICAO) Standards and Recommended Practices as established by the Global Navigation Satellite System Panel. GAGAN was launched in August 2010. With this India has become the 4th Country in the World to have satellite based navigation system.  It is a system to improve the accuracy of a GNSS receiver by providing reference signals.