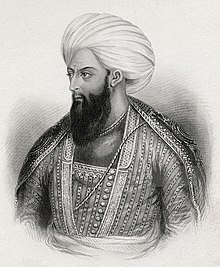 The state was established in 1724 by the Afghan Sardar Dost Mohammed Khan, who was a commander in the Mughal army posted at Mangalgarh, which lies to the north of the modern city of Bhopal. Taking advantage of the disintegration of the Mughal empire, he usurped Mangalgarh and Berasia (now a tehsil of the Bhopal District). Sometime later, he helped the Gond Queen Kamalapati by executing her husband’s assassins and restoring the little Gond kingdom back to her. The Queen gave him a princely sum of money and the Mouza village (which is situated near modern Bhopal city).

After the death of last Gond queen, Dost Mohammed Khan took his chance and seized the little Gond Kingdom and established his capital 10 km away from modern Bhopal, at Jagdishpur. He named his capital Islamnagar, meaning the city of Islam. He built a small fort and some palaces at Islamnagar, the ruins of which can still be seen today. After few years, he built a bigger fort situated on the northern bank of the Upper Lake. He named this new fort Fatehgarh (“the fort of victory”). Later the capital was shifted to the current city of Bhopal.

Although Dost Mohammed Khan was the virtual ruler of Bhopal, he still acknowledged the suzerainty of the declining Mughal Empire. His successors however, acquired the title of “Nawab” and declared Bhopal an independent state. By the 1730s, the Marathas were expanding into the region, and Dost Mohammed Khan and his successors fought wars with their neighbors to protect the small territory and also fought among themselves for control of the state. The Marathas conquered several nearby states, including Indore to the west and Gwalior to the north, but Bhopal remained a Muslim-ruled state under Dost Mohammed Khan’s successors. Subsequently, Nawab Wazir Mohammed Khan, a general, created a truly strong state after fighting several wars. Nawab Jehangir Mohammed Khan established a cantonment at a distance of one mile from the fort. This was called Jehangirabad after him. He built gardens and barracks for British guests and soldiers in Jehangirabad.

In February-March 1818, Bhopal became a princely state in British India as a result of the Anglo-Bhopal treaty between the East India Company and Nawab Nazar Muhammad (Nawab of Bhopal during 1816-1819). Bhopal state included the present-day Bhopal, Raisen, and Sehore districts, and was part of the Central India Agency. It straddled the Vindhya Range, with the northern portion lying on the Malwa plateau, and the southern portion lying in the valley of the Narmada River, which formed the state’s southern boundary. Bhopal Agency was formed as an administrative section of Central India, consisting the Bhopal state and some princely states to the northeast, including Khilchipur, Narsingarh, Raigarh, and after 1931 the Dewas states. It was administered by an agent to the British Governor-General of India.

An interesting turn came in the history of Bhopal, when in 1819, 18 year old Qudsia Begum (also known as Gohar Begum) took over the reins after the assassination of her husband. She was the first female ruler of Bhopal. Although she was illiterate, she was brave and refused to follow the purdah tradition. She declared that her 2 year old daughter Sikander will follow her as the ruler. None of the male family members dared to challenge her decision. She cared very well for her subjects and took her dinners only after receiving the news every night that all her subjects had taken meals. She built the Jama Masjid of Bhopal. She also built her beautiful palace – ‘Gohar Mahal’. She ruled till 1837. Before her death, she had adequately prepared her daughter for ruling the state.

In 1844, Sikander Begum succeeded her mother as the ruler of Bhopal. Like her mother, she too never observed purdah. She was trained in the martial arts, and fought many battles during her reign (1844–1868).During the Indian rebellion of 1857, she sided with the British and crushed all those who revolted against them. She did a lot of public welfare too – she built roads and reconstructed the fort. She also built the Moti Masjid (meaning the Pearl Mosque) and Moti Mahal (the Pearl Palace).

Sikander Begum’s successor Shah Jahan Begum was quite passionate about architecture, like her Mughal namesake emperor Shah Jahan. She built a vast mini-city, called Shahjahanabad after her. She also built a new palace for herself – Taj Mahal (not to be confused with the famous Taj Mahal at Agra). She built a lot of other beautiful buildings as well – Ali Manzil, Amir Ganj, Barah Mahal, Ali Manzil, Be nazir Complex, Khawasoura, Mughalpura, Nematpua and Nawab Manzils. Today also, one can see the ruins of Taj Mahal and some of its glorious parts that have survived the tests of time. Barah Mahal and Nawab Manzil have also withstood the test of time.

Sultan Kaikhusrau Jahan Begum, (9 July 1858-12 May 1930) daughter of Shah Jahan Begum, succeeded her in 1901, ruling to her abdication in favor of her son in 1926. She further advanced the emancipation of women and established a modern municipality in 1903[1]. She had her own palace Sadar Manzil (the present headquarters of Bhopal Municipal Corporation). But she preferred the quiet and serene environment at the outskirts of the city. She developed her own walled mini-city, named Ahmedabad after her late husband (not to be confused with Ahmedabad, Gujarat). This city was situated at Tekri Maulvee Zai-ud-din, which was at located a distance of a mile from the fort. She built a palace called Qaser-e-Sultani (now Saifia College). This area became a posh residency as royalty and elite moved here. The Begum installed the first water pump here and developed a garden called ‘Zie-up-Abser’. She also constructed a new palace called ‘Noor-us-Sabah’, which has been converted into a heritage hotel. She was the first president of the All India Conference on Education and first chancellor of the Aligarh Muslim University.