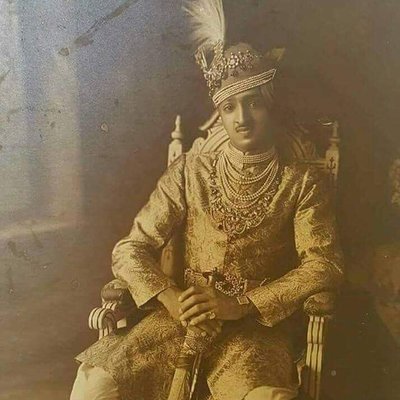 This is not very clear but there are few theories that how the name Baghel came and those are: The King of Anhil Bada, Gujrat King Kumarpal VIII had given a village to his same cast thakurs in a village called Vyaghrapalli and it was also called as Baghel. When the Thakur of Baghel had his son he gave him the name as Baghel and in this way the Baghel came in existence. As the first King of Baghel dynasty in Central India (Bandhavgarh) was Maharaja Vyaghradev so the name of Baghel came after his name.

The first man of the Baghel Dynasty (Maharaja Vyaghradev) was saved because of the blessings of Maa Durga and she was also called the Vyaghradevi and so the name of her Bagh was attached with the name of the first Maharaja and he was called Maharaja Vyaghradev Singh Ju Deo Baghel and in this way this Dynasty was called the Baghel dynasty.  When Did Maharaja Vyaghradev came to Vindhya (The first Baghel Ruler of Vindhya region) It is found that Maharaja Vyaghradev entered in this region in 1117 A.D.. He stayed in Chitrakoot and the scenic beauty of Chitrakoot attracted him and in this way he decided to spread his kingdom in this region. As there was no strong kingdom in this region so his feeling increased more. He found a vacant old fort Marfa 16kms far from Kaliger. This fort was earlier under the possession of Chandel kingdom of Mahova. Today also we get the ruins of the old temples made around it. The Fort was made of the red stones and there was a big pond near it. He appointed the people who came with his for the security and made their residence around the fort. He named this Place as Baghelwari.

Bandhavgarh Fort  Bandhavgarh Fort was an ancient fort. It was the business centre for the traders traveling between Kaushambi and Bharhut, at that time known as Bardawati (Bhaudhya root). Talemi has called Bandhavgarh and Balentipur, which is the Yunani translation of Balendupur. In the rein of kalchuri’s it was called “Haihay Kshetra”. The Wakatak used to live in this place and various Stone Writings are found written by them. They made the place to live by cutting stones. The Word Bandhavgarh means the Fort of Laxman and on the way of the Fort we get the stone carved Shesh Shai also, which proves this name more. There is a book called “Bandhavanchal Mahatm”, which proves this fact more and give the information about the ancient history of this place. There are some ruins found of the Fort in the Bamania Hill near Bandhavgarh and there are many sculptures and coins found in the nearby villages near Bandhavgarh, Bijhariya, Mala which prove the economical and artistic situation of the kingdom. In the rein on karan Deo Bandhavgarh was the capital of his Southern part of the Gahora kingdom.

He was born in 1536 A.D.. When he sat on the throne he gave custody to the world famous musician Tansen. He was married with the granddaughter of Gaudhraja kirti Singh, Yashoda Devi. On behalf of Jaunpur’s king Gaji Khan was the Governor of Soor, Akbar’s Sardar Asaf Khan attacked on him but he ran to the Maharaja Ramchandra and Maharaja Ramchandra provided him the custody. This annoyed Akbar and he ordered to attack on Gahora also. As Maharaja Ramchandra came to know about this he took Asaf Khan to Bandhavgarh with him. As Akbar came to know about it, he ordered his Sardar Asaf Khan to attack on Bandhavgarh also but Gaji ran from Bandhavgarh before Asaf Khan reached there. But after this Gahora (the capital of Baghels) and Kasauta came under the possession of Mughals forever. And this was the period when Bandhavgarh became the new capital of Baghel Dynasty 1564 A.D..  When Akbar in 1584 asked for the famous musician Tansen and pearl “Alwal” from his treasury he firstly denied for it and prepared himself to fight with Akbar, but when Beerwal, who had come to take Tansen and Tansen himself convinced him that it would not be good to fight with Akbar because it can damage the kingdom in many ways he agreed and gave Tansen to Akbar. Akbar got very happy and when Maharaja Ramchandra went to Prayag he invited him to Fatehpur Sikri and gave him the Title of “Rajendra Shiromani’ with 101 horses and Canon named Ramprasad. He also gave him the Itawa area as a gift. He had given Tansen 1 horse and a gold coin when he had sung in his Darbar for the first time. Famous historian Badayun also has written him as “Bharat Ka Vilakshan Dani Raja”

This was the period when the Baghels really became very weak, as when Maharaja Veer Bhadra died his both the sons were not very mature and that is why Akbar made Patradas the Governor of Bandhavgarh and in this way Bandhavgarh went in the hands of Akbar for few years. Somehow Akbar agreed and made Vikramaditya the king of Bandhavgarh again in 1617 A.D..  With the thought of insecurity Maharaja Vikramaditya went out for hunting and reached Rewa. When he saw the half made fort of Rewa by Salim Shah the son of Sher Shah Soori, he decided to make it his capital and started the work of Rewa fort.

He was born in 1823 A.D.. He made the Vishwanath Sagar in Govindgarh in 1855 and also made the small town and named it as Govindgarh on the name of God Ramagovind. There was a drought in his time in 1868. He made many hunting launches around Rewa He was the king who announced that which forest would be used by normal people and which will not be. He divided the jungles in prohibited and non-prohibited forests. The first English medium school was run by him in Rewa in 1867 with five teachers.

He was born in 1903. He became the king when he was of 16 years. He decreases the number of soldiers in Bandhavgarh and cut or closed many departments so that the expenses of the administration can be reduced. He shared the rights of the dams with the farmers with ratio of 55:45.  He started to maintain the records of each and everything done by him. In 1923,  he started the orphan house for the orphan children in Rewa. In 1936, he ploughed the field on the occasion of Dusherra ad started the “Bank of Baghelkhand” in 1934 on the occasion of Holi. He fell down from Bikaner House Mubai and died.