Integral humanism is a doctrine developed by Deendayal Upadhyaya and adopted by the Jana Sangh in 1965 as its official doctrine.It is also the official philosophy of the Bharatiya Janata Party.It aims to appeal to broad sections of Indian society by presenting an indigenous economic model that puts the human being at center stage .

The key element was humanism in political thought. His thoughts are relevant in today’s circumstances in national life of India. He was a political leader but more than it, he was a fundamental political thinker. India’s 1947 independence is political independence but Pandit Upadhyay is one of those thinkers in India who exercised on Swaraj of ideas. It means decolonisation of ideas, i.e. decolonisation of Indian minds. India was free politically but ideologically, colonial hangover was there.  His relevance lies in the fact that in political, social and cultural discourse, he introduced basic concept of Indian philosophy.  For example- he propounded in 1950 that there should not be artificial differences between left and right. This concept is irrelevant for India. In 2016, in latin America and EU, political thinkers are deliberating that left and right distinctions are artificial and damaging political discourse. He conceptualised that politics can’t free from ethics.

Integral humanism is a philosophical and scientific thought developed by Deendayal Upadhyaya and adopted by the Jana Sangh in 1965 as its official philosophy. It aims to appeal to broad sections of Indian society by presenting an indigenous development model that puts human identity at its centre.

According to Pandit Deendayal Upadhyaya, the primary concern in India should be to develop an indigenous development model that has human beings as its core focus.  It is opposed to both western capitalist individualism and Marxist socialism, though welcoming to western science. It seeks a middle ground between capitalism and socialism, evaluating both systems on their respective merits, while being critical of their excesses and alienness.

Humankind, according to Upadhyaya, had four hierarchically organized att 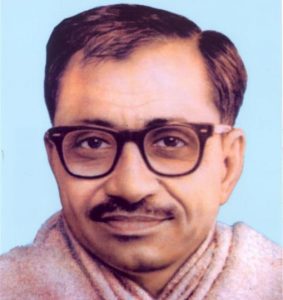 ributes of body, mind, intellect and soul which corresponded to the four universal objectives of dharma (moral duties), artha (wealth), kama (desire or satisfaction), and moksha (total liberation or ‘salvation’). While none could be ignored, dharma is the ‘basic’, and moksha the ‘ultimate’ objective of humankind and society. He claimed that the problem with both capitalist and socialist ideologies is that they only consider the needs of body and mind, and were hence based on the materialist objectives of desire and wealth.

Upadhyaya rejected social systems in which individualism ‘reigned supreme’. He also rejected communism in which individualism was ‘crushed’ as part of a ‘large heartless machine’. Society, according to Upadhyaya, rather than arising from a social contract between individuals, was fully born at its inception itself as a natural living organism with a definitive ‘national soul’ or ‘ethos’ and its needs of the social organism paralleled those of the individual.