Lord Mahavira was the son of Nayas and born to a royal couple in India in 599 B.C. He was the last and 24th tirthankara of Jainism. Though he was born in a royal family and had a comfortable life, he maintained a distance from all worldly possessions from an early age. By the age of thirty, Mahavira gave up his family and kingdom. He lived a tremendously strict life for 12 years as an ascetic. During this period, he even gave up his clothes along with all other worldly possessions. He spent most of this time meditating and achieving self control. He attained omniscience by the age of forty-two, thereby knowing everything about the past, present and future.

Jainism was opposed to rituals. Jainism believed in the possibility of solving the riddle of the universe to attain perfection without the concept of God. Jainism held that it was possible for any human being to realize absolute knowledge and attain absolute bliss through the intense human effort. The faith in self-reliance for achieving perfection was an integral part of Jainism. The Jainism teaches claim that the Jainas only can stand the scrutiny of reason.

The Jainas emphasized that knowledge could be perfected by right conduct. Knowledge without right conduct was mere futile and conduct without right knowledge was blind. The Jainas said that one could achieve complete mastery over oneself by subduing the passions. Emancipation was to be acquired not by observing rituals, prayers and sacrifices but by regulating moral and spiritual discipline. For this reason they attached great importance to the five vows – non-violence (ahiṁsā), truth (satya), non-stealing which implies not to take anything to which one was not entitled (aṣteye), celibacy or abstention from selfindulgence (brahmacharya) and non-possession or renunciation (aparigraha). Non-violence was accorded utmost importance among these principles. The three doctrines of Right faith, Right knowledge and Right conduct which were known as three jewels constituted the foundations of Jainism.

Jainism believes that no overall good of individuals or society can arise from violence. Jainism teaches that untruth, stealing, taking more than one’s fair share, immoderate pursuit of sensual pleasures and possessiveness are aspects of violence. All these involve passions, mental violence of self and of others.

Jainas are openly hostile in the matter of introducing the supernatural. Jainism believes that man is capable of controlling his own moral life. He can make ethical decisions and find ethical goals without non-human assistance of intervention. Ethical values require that the individual either to make or unmake himself in the world. The soul (individual soul) has a self identity which it preserves even in the ultimate condition. The morality brings about reformation in man’s nature. The conversion of the inner man leads to the way of freedom. Man should attempt to develop the tendency of indifference towards pleasure man holds infinitude in his finitude. The eternal consciousness is within the human experience which is the power that directs all human beings beyond all finite forms. 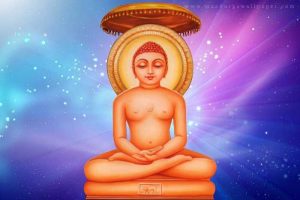 Although Indian thought considered both spiritual life and rational life as universal, the spiritual life is higher than the latter. Spiritual life is universal since the spirits, even for the schools that accepted their plurality have the same nature. Rational life is universal because reason has the same objective reference according to the understanding of all schools of thought. Indian thought maintains that the essence of man goes beyond even reason; it is Ᾱtman. Several systems of Indian philosophy hold that highest in man is not reason but spirit (Ᾱtman) which is above reason.

Jainism, a religion and philosophy of India, founded in about 6th century BC by Vardhamāna who is known as Mahāvīra (“Great Hero”), the 24th of the Tirthānkarās, (“Fordmakers”), Jainas means Conquerors”, whence the name Jainism, the great religious figures on whose example the religion is centered, in protest against the orthodox Vedic (early Hindu) ritualistic cult of the period. Its earliest proponents may have belonged to a sect that rebelled against the idea of practice of taking life prevalent in the Vedic animal sacrifice.