An open vision of Tagore

In a society, an individual can develop skill and knowledge through rigorous attempts to cope with the challenges of the environment. With this conscious attempt of survival in a given society, an individual shapes his/her own personality. This ever-evolving process of personality, corresponds to one’s educational acumen. Rabindranath Tagore pointed out two related directions of education: education of pleasure and education for need. The complex relation between these two directions has been immensely propagated in the idea of Visva-Bharati (University) and Sriniketan. In a lecture at Oxford (“Personality”), Tagore pointed out: ‘If the world is taken away, our personality will lose all its contents.’ An organic relation between the ‘concrete world’ and the ‘world within’ was derived by Tagore. In this relation, ‘Man’ and ‘Nature’ are juxtaposed to form human personality. Ideas of education that of self-respect, selfreliance or Palli-punargathan (resurrection of Villages) was evolving in his mind at that time.

After the establishment of Visva-Bharati University (1916), Rabindranath was involved in shaping abstract ideas of self-respect and self-reliance into reality. He was inspired by the notions of personality and the environment. As the first Asian to receive a Noble-Prize in Literature in 1913, Tagore practically left no stone unturned to develop his 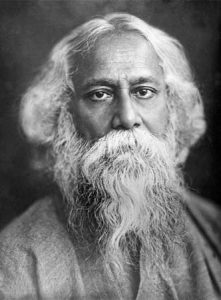 Visva-Bharati. The ‘Nationalism’ debate or questions on social inequality were dealt with an idea of social organic synthesis: one which an individual enjoys a space of his own and creates ‘joy’ in every sphere of activity. He was more concerned with the idea of natural social balance than any organised revolution. This concern matches his ideals in upholding self-reliance of a ‘marginal man’.

He welcomed the idea of ‘activity’ (Shram) in elementary education which he had implemented in Siksa-satra. But at the same time, he argues for western mode of progressive elementary education (John Dewae) that was advocated by James (1842 – 1914) and Charles Piears (1839 – 1910). He read William James’ book entitled Talks to Teachers and Students (1899), which was presented by scientist Jagadish Chandra Bose and discussed with his fellows several times. Rabindranath was influenced by Graham Wallas’ idea of “opportunity for continuous initiative”. ‘Freedom’ was the only milieu where this continuous initiative could take place. In Siksa-Satra (July 1924), this freedom of expression was the only quest. Tagore (1924) wrote: “It is only through the fullest development of all his capacities that man is likely to achieve his real freedom”. This is close to Gandhi’s elementary education model.

Lokshikkha Sansad (Mass Education Council, 1937) was Tagore’s outstanding idea through which he tried to spread his educational views to the margin. A model of accreditation of lifelong learning was there. And this ‘margin’ was not only on economic basis but also to reach the unreached and misplaced people.

To shape this idea, Tagore formed Lokshikkha Samsad (Mass Education Council) at Visva Bharati in 1937 (Visva-Bharati Bulletin, 1937). His primary aim was to reach the people who were beyond institutional educational ambit. The idea of Lokshikkha Samsad evolved in his mind after he critically analysed the limitations of conventional education system. Tagore realised the crux of the problem for social development was expansion of education which was not possible through school or college education only. The aim of self-reliance can only be achieved through vertical and horizontal expansion and that can only be possible if informal education goes beyond formal territory of institutional education. People have innumerable set of skills and knowledge in their lives. The open approach to education should incorporate.

these everyday knowledge and skills to form a better social equilibrium. Tagore had an idea to open all barriers of education to everyone. In Lokshikkha Samsad, a pattern of today’s open learning institution was observed long before the establishment of any open universities in the world. The study centre concept has been introduced to develop non-conventional mode of teaching. There was increasing number of study centres across the state in pre-independent Bengal annually.

Dayananda was an important Hindu reformist whose views did much to promote gender-equality, democracy, education, as well as a new confidence in India’s cultural past and future capabilities. In some respects, he qualifies as an architect of modern India as am emerging scientific and technological power. Aspects of his views impacted negatively on inter-religious relations, however, and contributed to extreme forms of Hindu nationalism which denies non-Hindus their complete civil rights. Yet, in his own day, when he spoke of the superiority of Hindu culture and religion, he was doing so in defense of what Europeans in India had insulted and denigrated. A consequence of assuming racial, cultural, or religious superiority over others is that they retaliate, and reverse what is said about them. The Arya Samaj is now a worldwide movement.