Tulsidas was the most important poet of the Rama Bhakti school. The wave of the Bhakti movement spear-headed in the North by Ramananda may have influenced Tulsidas. But to Ramananda it was irrelevant whether the devotee was a Nirguna or Saguna Bhakta so long as he followed Ramananda’s preaching and had religious fervour. His disciples were free to interpret Rama in any manner they liked so long as they felt drawn towards Him as an object of worship and devotion.

Among the different Bhakti schools, the most prominent were the Nirguna and Saguna. Nirguna School believed in formless God, whereas those belonging to Saguna worshipped a personal God with a form. Kabir who founded the Nirguna School of Bhakti conceived Rama as a formless God whereas Tulsidas and his followers worshipped Rama as Saguna God taking into account His divine.

Even the Nirguna School of Bhakti was split into two groups – those who believed in ‘gyan’ (knowledge) and had an intellectual approach to devotion and those who believed in love and attachment, and total surrender to God for attaining Him. Those who followed the latter path were the Sufis or mystics. The Saguna school of Bhakti also branched into two directions, one devoted to ‘Rama’ and the other for ‘Krishna’. The former school of saint poets was led by Tulsidas and the latter by Surdas. Thus in Hinduism the three schools of Bhakti which produced poetry of highest order was Kabir, Surdas and Tulsidas, besides the Sufis.

The magnum opus of Tulsidas is, however, Ramcharitmanas in Hindi or Avadhi. It is the life story of Rama as narrated by Valmiki in his Ramayana with slight modifications. The Manas has been adjudged as the best work in Hindi literature with devotion as the theme and, as one of the best epics in any tongue anywhere. It presents Rama as an ideal man in all respects, viz. as a son, brother, husband, friend, warrior and a king.

For Tulsidas Rama was an incarnation of God (Vishnu) Himself. No other book has made such a deep impact on the minds of the people in the North. Many scholars and even foreign critics have gone to the extent of comparing ‘Manas’ (Tulsidas) with Milton’s ‘Paradise Lost’. According to H.C. Kala, both believed in a life with spirituality and truth as the dominant note, struggle between good and evil, and ultimate triumph of god over evil. Both have a classical theme and subject; Tulsidas narrated the story of Rama and Ravana, and Milton having made us of Adam and Eve. 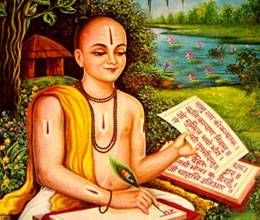 In his beautiful verse of couplets in rhyme (dohas), Tulsidas has described the greatness of Rama and also the characterization of Bharat, Sita, Lakshman and Kaushalya superbly. Equally fascinating is the collection of poems in Vinaya Patrika and Kavitavalli.  When Tulsidas abandoned home and became an ascetic, he is said to have spent fourteen years visiting numerous sacred places of pilgrimage. One of the moving descriptions by Tulsidas in the Manas is that of Chitrakoot which Rama, Lakshman and Sita passed during their exile.

A most touching incident about Tulsidas and Chitrakoot tells us about his unfathomable love for Lord Rama.  It is said at this crowded Chitrakoot Ghat Tulsidas sat making the paste of sandalwood waiting for the ‘darshan’ of Lord Rama, Sita and Lakshman who were to visit there. But actually when the Trio came to his counter and stood in front of him, Tulsidas was so engrossed in his love for making the paste for his Rama that he doesn’t look up!