Persuasion methods are also sometimes referred to as persuasion tactics or persuasion strategies:

There is the usage of force in persuasion, which does not have any scientific theories, except for its use to make demands. The use of force is then a precedent to the failure of less direct means of persuasion. Application of this strategy can be interpreted as a threat since the persuader does not give options to his or her request.

There are 6 weapons of influence:

The principle of reciprocity states that when a person provides us with something, we attempt to repay him or her in kind. Reciprocation produces a sense of obligation, which can be a powerful tool in persuasion. The reciprocity rule is effective because it can be overpowering and instill in us a sense of obligation. Generally, we have a dislike for individuals who neglect to return a favor or provide payment when offered a free service or gift. As a result, reciprocation is a widely held principle. This societal standard makes reciprocity extremely powerful persuasive technique, as it can result in unequal exchanges and can even apply to an uninvited first favor.

Consistency is an important aspect of persuasion because it: 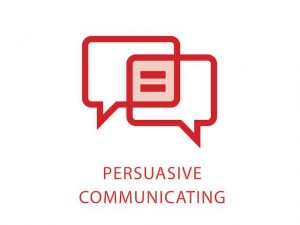 Consistency allows us to more effectively make decisions and process information. The concept of consistency states that someone who commits to something, orally or in writing, is more likely to honor that commitment. This is especially true for written commitments, as they appear psychologically more concrete and can create hard proof. Someone who commits to a stance tends to behave according to that commitment. Commitment is an effective persuasive technique, because once you get someone to commit, they are more likely to engage in self-persuasion, providing themselves and others with reasons and justifications to support their commitment in order to avoid dissonance. Cialdini notes Chinese brainwashing of American prisoners of war to rewrite their self-image and gain automatic unenforced compliance. Another example is children being made to repeat the Pledge of Allegiance each morning and why marketers make you close popups by saying “I’ll sign up later” or “No thanks, I prefer not making money”.

We, as humans, are influenced by others around us; we want to do what everyone else is. People often base their actions and beliefs on what others around them are doing, how others act or what others believe.  “The power of the crowd” is very effective. We all want to know what others are doing around us. We are so obsessed with what others do and how others act, that we then try to be just like other people. Cialdini gives an example that is somewhat like this: In a phone–a–thon, the host says something like, “Operators are waiting, please call now.” The only context you have from that statement is that the operators are waiting and not busy. Rather the host may say: “If operators are busy, please call again.” This is the technique of social proof. Just by changing three words, it sounds like the lines are busy and other people are calling, so it must be a worthwhile organization.  Social proof is most effective when people are uncertain or when there are similarities in a situation. In uncertain or ambiguous situations, when multiple possibilities create choices we must make, people are likely to conform to what others do. We become more influenced by people around us in situations that present a decision. The other effective situation for social proofing is when there are similarities. We are more prone to change or conform around people who are similar to us. If someone who is similar to you is being controlling and a leader, you are more likely to listen and follow what they say.

This principle is simple and concise. People say “yes” to people that they like. Two major factors contribute to overall likeness. The first is physical attractiveness. People who are physically attractive seem more persuasive. They get what they want and they can easily change others’ attitudes. This attractiveness is proven to send favorable messages/impressions of other traits that a person may have, such as talent, kindness, and intelligence. The second factor is similarity. We are more easily persuaded by people we see as similar to ourselves.

We have the tendency to believe that if an expert says something, then it must be true. People like to listen to those who are knowledgeable and trustworthy, so if you can be those two things, then you are already on your way to getting people to believe and listen to you.  In the Milgram study, a series of experiments begun in 1961, a “teacher” and a “learner” were placed in two different rooms. The “learner” was attached to an electric harness that could administer shock. The “teacher” was told by a supervisor, dressed in a white scientist’s coat, to ask the learner questions and punish him when he got a question wrong. The teacher was instructed by the study supervisor to deliver an electric shock from a panel under the teacher’s control. After delivery, the teacher had to up the voltage to the next notch. The voltage went up to 450 volts. The catch to this experiment was that the teacher did not know that the learner was an actor faking the pain sounds he heard and was not actually being harmed. The experiment was being done to see how obedient we are to authority. “When an authority tells ordinary people it is their job to deliver harm, how much suffering will each subject be willing to inflict on an entirely innocent other person if the instructions come ‘from above’?.” In this study the results show that most teachers were willing to give as much pain as was available to them. The conclusion was that people are willing to bring pain upon others when they are directed to do so by some authority figure.

Scarcity is a principle that people underestimate. When something has limited availability, people assign it more value. According to Cialdini, “people want more of what they cannot have.” When scarcity is an issue, the context matters. This means that within certain contexts, scarcity “works” better. To get people to believe that something is scarcer, marketers explain what about that certain product provides what no other product does. Marketers also get people to believe something is scarce by telling them what they will lose, not what they will gain—using statements like, “You will lose $5,” rather than, “Save $5.” There are two major reasons why the scarcity principle works:

When this happens, we assign the scarce item or service more value simply because it is harder to acquire.  This principle is that we all want things that are out of our reach. If we see something is easily available, we do not want it as much as something that is very rare.