Prejudice is an unjustified or incorrect attitude (usually negative) towards an individual based solely on the individual’s membership of a social group.

For example, a person may hold prejudiced views towards a certain race or gender etc . (e.g. sexist).

Discrimination is the behavior or actions, usually negative, towards an individual or group of people, especially on the basis of sex/race/social class, etc.

The Difference Between Prejudice and Discrimination

A prejudiced person may not act on their attitude.  Therefore, someone can be prejudiced towards a certain group but not discriminate against them.  Also, prejudice includes all three components of an attitude (affective, behavioral and cognitive), whereas discrimination just involves behavior.

There are four main explanations of prejudice and discrimination:

Adorno et al. (1950) proposed that prejudice is the results of an individual’s personality type. They piloted and developed a questionnaire, which they called the F-scale (F for fascism).

Adorno argued that deep-seated personality traits predisposed some individuals to be highly sensitive to totalitarian and antidemocratic ideas and therefore were prone to be highly prejudicial.

also known as realistic group conflict theory (initialized RGCT), is a social psychological model of intergroup conflict.The theory explains how intergroup hostility can arise as a result of conflicting goals and competition over limited resources, and it also offers an explanation for the feelings of prejudice and discrimination toward the outgroup that accompany the intergroup hostility. Groups may be in competition for a real or perceived scarcity of resources such as money, political power, military protection, or social status.

Feelings of resentment can arise in the situation that the groups see the competition over resources as having a zero-sums fate, in which only one group is the winner (obtained the needed or wanted resources) and the other loses (unable to obtain the limited resource due to the “winning” group achieving the limited resource first). The length and severity of the conflict is based upon the perceived value and shortage of the given resource. According to RCT, positive relations can only be restored if superordinate goals are in place. 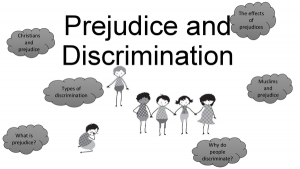 A stereotype is a fixed, over generalized belief about a particular group or class of people.

The use of stereotypes is a major way in which we simplify our social world; since they reduce the amount of processing (i.e. thinking) we have to do when we meet a new person.  By stereotyping we infer that a person has a whole range of characteristics and abilities that we assume all members of that group have. Stereotypes lead to social categorization, which is one of the reasons for prejudice attitudes (i.e. “them” and “us” mentality) which leads to in-groups and out-groups.

Most stereotypes probably tend to convey a negative impression.  Positive examples would include judges (the phrase “sober as a judge” would suggest this is a stereotype with a very respectable set of characteristics), overweight people (who are often seen as “jolly”) and television news readers (usually seen as highly dependable, respectable and impartial).  Negative stereotypes seem far more common, however.

Social identity is a person’s sense of who they are based on their group membership.

Tajfel (1979) proposed that the groups (e.g. social class, family, football team etc.) which people belonged to were an important source of pride and self-esteem. Groups give us a sense of social identity: a sense of belonging to the social world.

Therefore, we divided the world into “them” and “us” based through a process of social categorization (i.e. we put people into social groups).  This is known as in-group (us) and out-group (them).  Social identity theory states that the in-group will discriminate against the out-group to enhance their self-image.

The central hypothesis of social identity theory is that group members of an in-group will seek to find negative aspects of an out-group, thus enhancing their self-image.

Prejudiced views between cultures may result in racism; in its extreme forms, racism may result in genocide, such as occurred in Germany with the Jews, in Rwanda between the Hutus and Tutsis and, more recently, in the former Yugoslavia between the Bosnians and Serbs