ð Bolivia’s President Evo Morales has been highlighting his government’s independence from international money lending organizations and their detrimental impact the nation.

ð Some of Bolivia’s largest resistance struggles in the last 60 years have targeted the economic policies carried out by the International Monetary Fund and the World Bank. 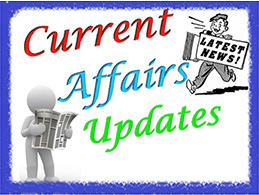 ð The 2017 BRICS Youth Forum opened in Beijing, China to discuss the development of the youth in the countries.
ð The theme of the three-day forum is ‘Enhance BRICS Partnership, Promote Youth Development’.
ð The five BRICS countries are Brazil, Russia, India, China and South Africa first came up with the idea of establishing a dialogue mechanism for BRICS youth in 2014 during a meeting between BRICS leaders in South Africa.

ð The Centre approved the construction of 30,000 houses for the urban poor on private land in Maharashtra’s Sholapur.
ð The main aim is to give momentum to affordable housing in urban areas.
ð Under the Centre’s flagship programme Pradhan Mantri Awas Yojana (Urban), the Housing and Urban Affairs Ministry gave approval to the Central assistance of Rs 450 crore for the project.
ð Under PMAY(U) the Raynagar Cooperative Housing Federation, Sholapur had submitted a proposal to build 30,000 houses for its members comprising beedi and textile workers and other urban poor belonging to the Economically Weaker Sections (EWS) at a cost of Rs 1,811 crore.

ð India launched its biggest yet fight against the use of shell companies to evade tax or launder money by targetting around 30,000 companies and their directors in 2016-17, a government official said on condition of anonymity.

ð The number is significant because the finance ministry and various investigative agencies launched only 1150 investigations against shell companies in the previous three years.

ð Shell companies meticulously comply with statutory requirements such as filing tax returns and annual reports so that they do not draw attention, unlike defunct companies.

ð Shell Company is a corporate entity without active business operations or significant assets. They are often created to avoid taxes and many big companies create shell corporations to avoid taxes without attracting legal actions.

ð It can’t be asserted that shell corporations are illegal. They are deliberate financial arrangements to avoid taxes. Tax avoidance is not illegal, though it is not desirable.

ð Now, there is increasing attempts globally and nationally from governments to check tax avoidance. Hence, shell companies are coming under government scanner.

ð The International Boxing Association (AIBA) has announced that India will host their first Men’s World Championship in 2021.

ð The announcement was made after a two-day executive committee meeting that was held in Moscow.

ð The 2019 Women’s World Championships will be held in Trabzon, Turkey.