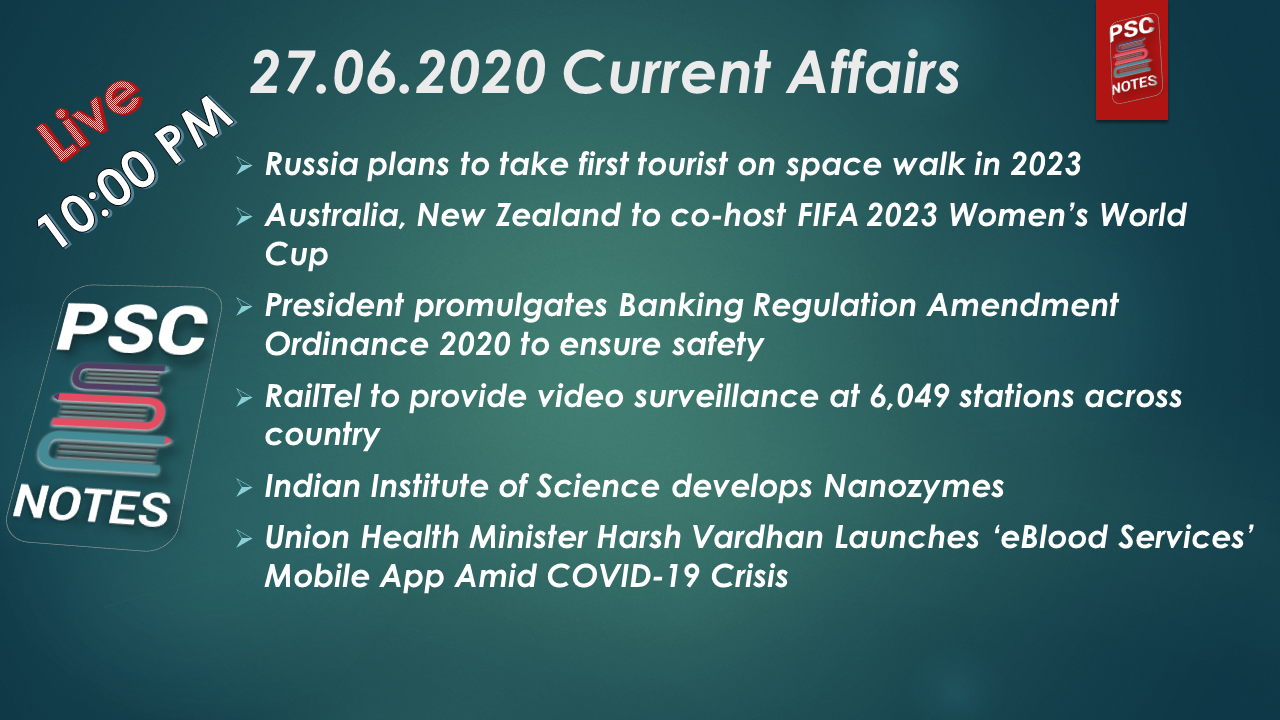 Each govt college to get Rs 30,000 to install sanitiser machines

The higher education department has planned a budget of Rs 60,00,000 for purchase of sanitiser machines for these colleges and each college will be sanctioned with an amount of Rs 30000 for two sanitizer machines.

Those colleges that are under the World Bank’s project have been included for the purchase of the sanitizer machines.

Russia plans to take first tourist on space walk in 2023

Russia’s Energia space corporation said that it will take the first tourist on a space walk in 2023, under the terms of a new contract with a US partner.

Energia has inked a contract with Space Adventures, which promises to take two space tourists to the International Space Station.

As per the deal, two tourists will be sent to the International Space Station (ISS) in the year 2023 under the joint agreement of both the companies.

From the end of RSC Energia, one of the two tourists will be able to do a spacewalk together with a cosmonaut from Roscosmos.

The joint bid beat Colombia 22-13 in a vote by FIFA’s ruling council, which judged them as having the best commercial prospects for women’s soccer.

FIFA President Gianni Infantino was one of the members who voted for Australia and New Zealand to stage the first 32-team Women’s World Cup.

FIFA’s decision means South America is still waiting to host its first Women’s World Cup, a tournament that was first played in 1991.

The 2023 tournament will be the first time a World Cup for men or women will be shared across two countries from different FIFA confederations.

The Ordinance will seek to protect the interests of depositors and strengthen cooperative banks by improving governance and oversight.

The ordinance will extend powers that are already available with RBI in respect of other banks to Co-operative Banks and for sound banking regulation, and by ensuring professionalism and enabling their access to capital.

The amendments do not affect existing powers of the State Registrars of Co-operative Societies under state co-operative laws.

The amendments do not apply to Primary Agricultural Credit Societies (PACS) or co-operative societies whose primary object and principal business is long-term finance for agricultural development, and which do not use the word “bank” or “banker” or “banking” and do not act as drawees of cheques.

RailTel to provide video surveillance at 6,049 stations across country

The Indian Railways has signed a memorandum of understanding (MoU) with RailTel for installation of an IP-based video surveillance system at 6,049 railway stations across the country.

RailTel is a public sector undertaking (PSU) under the Ministry of Railways.

It will provide the video surveillance system (VSS) work at the 6,049 stations under categories A1, A, B, C ,D and E of the Indian Railways.

The scope of work also includes integration of the existing standalone CCTV network of the railways into the VSS system for centralised monitoring.

A research team at the Indian Institute of Science in Bengaluru has developed nanozymes that destroy the cell membrane of bacteria by directly targeting its phospholipids.

Nanozymes are nanomaterials that can disintegrate the cell membranes of a range of diseases causing bacteria.

It was found that the nanozyme stopped growth and killed the microbes.

Notably, this initiative would help the people to get the blood on time just by registering on the application.

A person will be able to place orders for four units of blood at a time.

The ‘eBloodServices’ mobile application is developed by the ERaktkosh team of Centre for Development of Advanced Computing (C-DAC).