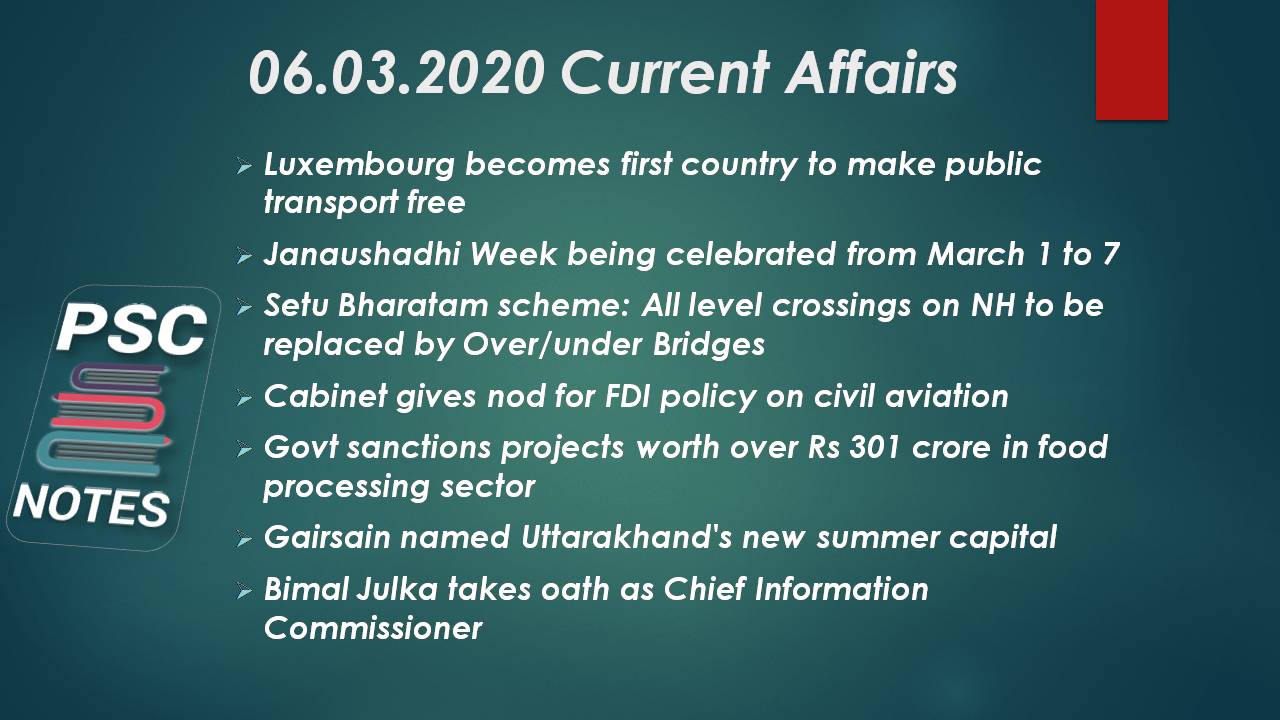 Hunar Haat is an exhibition of handicrafts and traditional products made by artisans from the Minority communities.

It is organized by the Ministry of Minority Affairs.

Hunar Haat is organized under USTTAD-Upgrading the Skills and Training in Traditional Arts/Crafts for Development scheme.

Luxembourg has become the first country with a free public transport system, with all fares for trams, trains and buses abolished as of February 29 2020.

The one exception is first-class train travel, which will cost £2.60 (€3) per journey.

The scheme was originally announced in 2018, with a summer 2019 launch planned, but delays pushed the move back to this year.

Luxembourg has just over 600,000 inhabitants, but 214,000 more travel in for work every day from neighbouring Germany, Belgium and France, causing heavy traffic jams as the majority of workers commute by car.

Janaushadhi Week being celebrated from March 1 to 7

Janaushadhi week is being celebrated across the country from the 1st of this month through more than 6200 Pradhan Mantri Bhartiya Janaushadhi Kendras.

Free distribution camps for Suvidha Sanitary Napkins were held at about 2000 places and more than 50,000 Sanitary Napkin packets were given free of cost to the women.

Pradhan Mantri Bhartiya Janaushadhi Pariyojana is a noble initiative of the Government which is now making an impact on masses in its endeavor to provide quality medicines at an affordable price.

The total sales in the financial year 2019-20 till February have crossed 383 crore which led to total savings of about 2200 crore rupees of common citizens.

Setu Bharatam scheme: All level crossings on NH to be replaced by Over/under Bridges

Government has envisaged replacement of all the level crossings on National Highways by Road Over Bridges or Road Under Bridges under the Setu Bharatam scheme.

The programme is being implemented by the Road Transport and Highways Ministry to ensure safe and smooth flow of traffic and reduce road fatalities by 50 percent by 2020.

Setu Bharatam programme was launched to make all National Highways free of railway level crossings in order to prevent the frequent accidents and loss of lives at level crossings.

208 places were identified for construction of rail over-bridges or underpasses under the project at a cost of nearly 10,200 crore rupees.

The Non Resident Indians can acquire up to 100 per cent equity in Air India under automatic route.

The Minister said, earlier only 49 per cent were available for sale to NRIs but now they can purchase 100 percent.

The Union Government has sanctioned ten projects worth over 301 crore rupees in the food processing sector.

The projects were sanctioned under the Agro Processing Cluster Scheme of Kisan Sampada Yojana.

100 per cent FDI is permitted under the automatic route in Food Processing Industries and 100 per cent FDI is allowed through approval route for trading including e-commerce in respect of food products manufacture and produced in India.

One hundred per cent Income Tax exemption from profit derived from activities such as post-harvest value addition to agriculture by FPO’s having annual turnover up to 100 crore rupees.

Rawat made the announcement immediately after concluding his budget speech on the third day of the assembly session convened in Gairsain.

Gairsain, located in Chamoli district between the Kumaon and Garhwal regions, will function as the summer capital.

Uttarakhand was carved out as a separate state from Uttar Pradesh in 1998.

Julka, who has earlier served as the Union Information and Broadcasting Secretary, was administered the oath of the office at a ceremony held at Rashtrapati Bhavan.

The post was vacant after the transparency watchdog chief Sudhir Bhargava retired on January 11.