India’s traditional village economy was characterised by the “blending of agriculture and handicrafts”.  But this internal balance of the village economy had been systematically slaughtered by the British Government. In the process, traditional handicraft industries slipped away, from its pre-eminence and its decline started at the turn of the 18th century and proceeded rapidly almost to the beginning of the 19th century.  This process came to be known as ‘de-industrialisation’—a term opposite to industrialisation. The use of the word ‘de-industrialisation’ could be traced to 1940. Its dictionary meaning is ‘the reduction or destruction of a nation’s industrial capacity’. This term came into prominence in India to describe the ‘process of destruction of Indian handicraft industries by competition from the products of British manufacture during the nineteenth century’.

Industrialisation is associated with a relative shift in the proportion of national income as well as workforce away from agriculture. In other words, with the progress of industrialisation, proportion of income generated by and the percentage of population dependent on industry should decline.  While estimating the distribution of global output of manufactured goods, P. Bairoch concluded that India’s share of manufacturing output in the world was as high as 1.9.7 p.c. in 1800. In a span of 60 years, it plummeted to 8.6 p.c. (in 1860) and to 1.4. p.c. in 1913. The declining share of industrial output in the’ world output could be attributed to an absolute decline in manufacturing output per person. 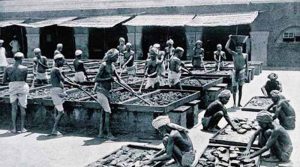 Impact of decline of handicraft industry on india

Cheap and machine-made imports flooded the Indian market after the Charter Act of 1813 allowing one-way free trade for the British citizens. On the other hand, Indian products found it more and more difficult to penetrate the European markets.  After 1820, European markets were virtually closed to Indian exports. The newly introduced rail network helped the European products to reach the remotest corners of the country.

The loss of traditional livelihood was not accompanied by a process of industrialisation in India, as had happened in other rapidly industrialising countries of the time. This resulted in deindustrialisation of India at a time when Europe was witnessing a re-intensified Industrial Revolution. This happened at a time when Indian artisans and handicraftsmen were already feeling the crunch due to loss of patronage by princes and the nobility, who were now under the influence of new western tastes and values.  Another feature of deindustrialisation was the decline of many cities and a process of ruralisation of India. Many artisans, faced with diminishing returns and repressive policies (in Bengal, during the Company’s rule, artisans were paid low wages and forced to sell their products at low prices), abandoned their professions, moved to villages and took to agriculture.

This resulted in increased pressure on land. An overburdened agriculture sector was a major cause of poverty during British rule and this upset the village economic set-up.  From being a net exporter, India became a net importer.

Nationalists and Their Critique

Nationalists, Dada Bhai Naoroji, M.G. Ranade and R.C. Dutt, Rajni Palme Dutt etc. saw the destruction of Indian industry as a consequence of colonialism and they discussed deindustrialization process in context of the impact of colonial rule in India. In the beginning of the 19th century, exports of small-scale industry products came down, while on the other hand, imports of British industrial products were on the increase. This decline could be traced in cotton textiles’ import by Britain between the period 1860 (96 million pound sterling) to 1880 (1 billion 70 million pound sterling) and finally in 1900 (27 billion pound sterling). R.C. Dutt and others argue that the decline in imports shows that the demands for Indian textiles was coming down in foreign markets in the beginning of the 19th century and increasing exports indicate that the Indian handicrafts were thrown out from the indigenous market. This policy was pursued with the object of replacing the manufacturers of India, as far as possible, by British manufacturers.                                In 1960’s David Morris David questioned the assumptions and arguments of the Nationalists. He said that there was not much evidence available to demonstrate deindustrialization process in India. Morris claimed that British manufactured clothes did not harm the Indian industry because the population of India was increasing along with an increase of purchasing power of the Indians that led to an increase in demand for Indian textiles in India; so the demand for clothes was met by raising British imports, without damaging indigenous production.     Bipin Chandra, Toru Matsui and Tapan Roychaudhuri have argued, in response to Morris, that evidence points towards deindustrialization. Going by reports of famines, eye witnesses and traveler’s accounts, official enquiries and government reports of the British East India Company etc. were all pointers towards the worse possible impact of British manufactured goods in India. These thinkers said that there was not enough.

to woven cloth was very low. During 1849 to 1889 the import of cloth increased by 25.5 million sterling, while on the other hand, yarn imports increased by merely 1.8 million sterling. Indian weavers, therefore, could not really benefit from the decline in yarn prices that was comparatively less fruitful as it did not bring about the required reduction in the cost of their cloth to be able to compete with British machine-woven cloth, which was a lot cheaper.     Morris also argued that in spite of the imports from Birmingham, Manchester etc. Indian small-scale industry survived because Indian small-scale industry produced its own market. Though there exists no evidence that Indian industry did not face any destruction, but Morris gave a partial answer to this question by being surprised how Indian small scale-industry survived in spite of oddities before the nation and the arrival of competition, vide machine made cheaper imported commodities. However, the reality is that despite adverse circumstances, the weavers did not abandon their occupation because they had deep attachment with caste-based occupations. The other reason was that they had no other alternative to earn their livelihoods and many were trapped in debt.

The Nationalist faced a common criticism that they had not enough evidence to demonstrate deindustrialization, specifically in the period prior to recordings made by the census. However later historians, like Amiya Kumar Bagchi, managed to get some statistical evidence. Bagchi showed the evidence provided by the survey conducted by Francis Buchanan- Hamilton in Gangetic Bihar between 1809-1813 and the census data of 1901. According to Bagchi’s analysis, the percentage of population dependent on industries was 18.6 in 1809-1813, which declined to 8.5 percent in subsequent findings     Marika Vicziany pointed out that Buchanan- Hamilton’s survey could not be regarded as very reliable as he gathered information from local people, who may have given him incorrect information due to fear of the motive of foreigners. Local people further suspected that the East India Company might use the information to increase revenue or intervene in their lives. Vicziany also argued that Buchanan- Hamilton’s classification of spinners was not very accurate because spinners could not have supported themselves only on the basis of spinning; in her view spinners did not earn enough and should be classified as part-time spinners. So the estimate of spinners was erroneous. Bagchi responded and said even if spinning did not support spinners fully it constituted the principal means of their livelihood .

The Other Side of the Debate

In the early 1960s Daniel Thorner argued that the censuses from 1881-1931 showed that there was not much change in the proportion of population engaged in industrial occupations. He elaborated that on a first impression, the census figures indicate that the male work-force in agriculture was 65% and increased to 72% in 1931. In the same period their proportion in industry declined from 16% in 1881 to 9% in 1931 suggestive de-industrialization. However, Thorner questioned this by describing the census categories as erroneous because it assumed a clear-cut separation between agricultural work-force and general labour-force and between industrial work-force and trade. In Daniel’s view, this hard segregation was not possible in an agricultural economy like that of India which constrained people, during seasonal periods, to shift from one industry to another.

According to the Thorner, if these categories are merged then the picture looks different. Then the increase in the work-force in the primary sector, i.e. agriculture works out to about 2% and the decline in industry and trade amounts to only about 3% between 1881-1931. Thorner also dismissed the statistics on female labour on the ground that census officials themselves regarded them as inaccurate. Therefore in their view, which is somewhat controversial, the census figures do not provide evidence to support substantial de-industrialization. Nonetheless, Thorner, however, conceded that there may have been de-industrialization in India before 1881.

Some questions were raised by Tirthankar Roy and others, who have objected to the exclusion of women from the analysis. Women’s participation declined dramatically during the census period. It seems that in the Indian social context, women in many artisan families gave up artisanal work earlier than men to take up household or agricultural work. Hence any exclusion of their data would not show much change in occupational structure while the inclusion of data related to women will show a decline in the number of people engaged in industrial activity.     Recent research suggests that different regions and commodities experienced the impact of machine-made goods in different ways, depending on when they came under colonial rule. Thus for example, British-manufactured goods affected the economy of eastern India far more than other regions. Historians like Tapan Roychaudhury argue that the conditions of the artisans and weavers of eastern India started deteriorating soon after the Battle of Plassey (1757) and their condition worsened in the 19th century. It has also been suggested that that the Madras Presidency suffered less compared to Bengal and western India.