In 1897 J.J. Thomson discovered electron as a constituent of atom. He determined that an electron had a negative charge and had very little mass as compared to that of the atom. Since an atom was found to be electrically neutral it was inferred that some source of positive charge must be present in the atom. This soon led to the experimental 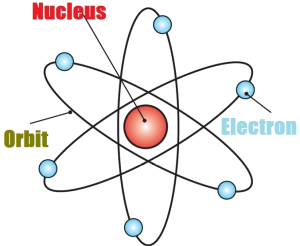 discovery of the proton, which is a positively charged subatomic particle. Proton was found approximately 1840 times heavier than an electron. Further‘ experiments revealed that the atomic masses were more than that expected from the presence of just protons and electrons in the atom.Sir James Chadwick discovered neutraly charged neutron in 1932.

Various theories put forwarded regarding the structure are as follows:-

John Dalton used the Greek concept of an atom and the laws of definite proportions, conservation of mass and multiple proportions to give the atomic theory on scientific basis. Dalton’s atomic theory states that all matter is made of atoms. Atoms are indivisible and indestructible, all atoms of a given element are identical in mass and properties,compounds are formed by a combination of two or more different kinds of atoms and a chemical reaction is a rearrangement of atoms.

The discovery that atoms contained electrons caused Thompson to predict an atomic structure, according to which the whole atom was considered to be a positive sphere,

with negatively charged electrons embedded in it like a plum in a pudding. Thompson’s model did not have any nucleus in it.

But, with the discovery of the nucleus and positively charged proton and neutrally charged neutrons, two more important models of atomic structure were put forward:

Rutherford atomic model, though a major breakthrough with a central nucleus and surrounding electrons, did not explain how an electron keeps revolving around the nucleus without losing energy.

Niels Bohr expanded Rutherford’s theory further and gave a clear concept of balancing the attractive force and the centrifugal force of the revolving electrons.

The atomic theory put forward by Niel’s Bohr, was completely successful, except for certain corrections, like replacement of the orbits of Bohr by orbitals, etc.