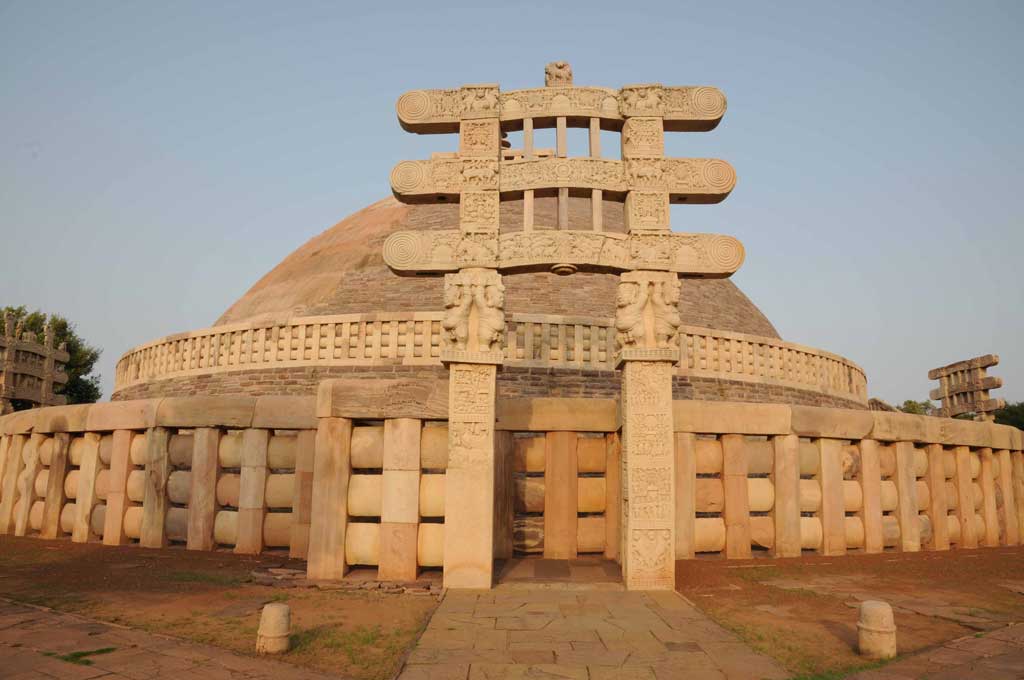 The Great Stupa at Sanchi has been the focal point of the Buddhist faith in the region since it was built by Emperor Ashoka in the 3rd century BC. The grand structure still inspires awe today and sits at the top of a hill, surrounded by the remains of smaller stupas, monasteries, and temples that were built as the religious community grew in the centuries after the site was founded.

The main body of the stupa symbolises the cosmic mountain. It is topped by a ‘harmika’ to hold the triple umbrella, or ‘chhatraveli’, which represents the three jewels of Buddhism – the Buddha, the Dharma, and the Sangha. The high circular terrace against the base is accessible by staircases and is designed for worshippers to be able to walk around the stupa. On the ground level, there is another procession path that is surrounded by stone balustrades.

The gateways at the four cardinal points are the highlights of the structure, with a series of detailed carvings showing Buddhist symbols and important historical and religious scenes. Interestingly, Buddha is always shown in these carvings as a symbol and not as a human. He is represented on the gateways as a horse without a rider, an umbrella above an empty throne, the Bodhi tree, or as footprints.

The Khajuraho Group of Monuments

Khajuraho, the ancient Kharjjuravahaka, is located in the State of Madhya Pradesh and was the principal seat of authority of the Chandella rulers who adorned it with numerous tanks, scores of lofty temples of sculptural grace and architectural splendour.  Yasovarman (A.D. 954) built the temple of Vishnu, which is now famous as Lakshmana temple, and is an ornate and evolved example of its time proclaiming the prestige of the Chandellas.  Temples of Khajuraho are world famous for their architectural art and have been declared world heritage by UNESCO.

The Visvanatha, Parsvanatha and Vaidyanatha Temples belong to the time of king Dhanga, the successor of Yasovarman. The Jagadambi, Chitragupta, are noteworthy among the western group of royal temples of Khajuraho. The largest and grandest temple of Khajuraho is the immortal Kandariya Mahadeva, which is attributed to king Ganda (A.D. 1017-29). The other examples that followed viz., Vamana, Adinatha, Javari, Chaturbhuj and Duladeo, are smaller but elaborately designed. The Khajuraho group of temples is noted for lofty terraces (jagati) and functionally effective plans. The sculptural embellishments include, besides the cult images; parivara, parsva, avarana devatas, dikpalas, the apsarases and sura-sundaris, which win universal admiration for their delicate, youthful female forms of ravishing beauty. The attire and ornamentation embrace the winsome grace and charm.

Bhimbetka rock shelters, series of natural rock shelters in the foothills of the Vindhya Range, central India. They are situated some 45 km south of Bhopal, in west-central Madhya Pradesh state. Discovered in 1957, the complex consists of some 700 shelters and is one of the largest repositories of prehistoric art in India. The shelters were designated a UNESCO World Heritage site in 2003. The complex is surrounded by the Ratapani Wildlife Sanctuary.

The Bhimbetka region is riddled with massively sculpted formations in the sandstone rock. On the Bhimbetka site’s hill alone, where the bulk of the archaeological research has been concentrated since 1971, 243 shelters have been investigated, of which 133 contain rock paintings. In addition to the cave paintings, archaeologists have unearthed large numbers of artifacts in the caves and in the dense teak forests and cultivated fields  around Bhimbetka, the oldest of which are Acheulean stone tool assemblages.

The caves provide a rare glimpse at a sequence of cultural development from early nomadic hunter-gatherers to settled cultivators to expressions of spirituality. It has been observed that the present-day cultural traditions of agrarian peoples inhabiting the villages surrounding Bhimbetka resemble those represented in the paintings.