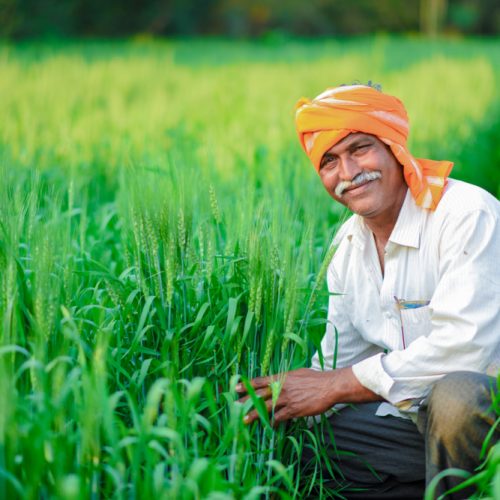 Overview of agriculture sector in India

✓ Irrigation: Only 34.5% of total cropped area is irrigated in India. To improve irrigation facility Pradhan Mantri Krishi Sinchayee Yojana was launched by government.

✓ Agriculture Mechanization: As 50% of Indian population would be urban by the year 2050 (World Bank), It is estimated that percentage of agricultural workers of total work force would drop to 25.7% by 2050 from 58.2% in 2001. Thus, there is a need to cater the increasing food security need by enhancing the level of farm mechanization in the country which has the potential to increase productivity up to 30% and reduce the cost of cultivation up to 20%.

Role of agriculture in Indian economic development-interrelationship between agriculture, industry and service sectors

Agriculture is the only major source of food supply as it is providing regular supply of food to such a huge size of population of our country. It has been estimated that about 60 per cent of household consumption is met by agricultural products.

Role of Agriculture for Industrial Development

Agriculture in India has been the major source of supply of raw materials to various important industries of our country. Cotton and jute textiles, sugar, vanaspati, edible oil plantation industries (viz. tea, coffee, rubber) and agro-based cottage industries are also regularly collecting their raw materials directly from agriculture.  About 50 per cent of income generated in the manufacturing sector comes from all these agro-based industries in India. Moreover, agriculture can provide a market for industrial products as increase in the level of agricultural income may lead to expansion of market for industrial products.

Role of Agriculture in Economic Planning

The prospect of planning in India also depends much on agricultural sector. A good crop always provides impetus towards a planned economic development of the country by creating a better business climate for the transport system, manufacturing industries, internal trade etc.  A good crop also brings a good amount of finance to the Government for meeting its planned expenditure. Similarly, a bad crop lead to a total depression in business of the country, which ultimately lead to a failure of economic planning. Thus the agricultural sector is playing a very important role in a country like India and the prosperity of the Indian economy still largely depends on agricultural sector. Thus from the foregoing analysis it is observed that agricultural development is the basic precondition of sectoral diversification and development of the economy.

Agriculture is one of the major sources of revenue to both the Central and State Governments of the country. The Government is getting a substantial income from rising land revenue. Some other sectors like railway, roadways are also deriving a good part of their income from the movement of agricultural goods.

Industry is not the substitute of agriculture, rather they are complementary to one another. Both these sectors are so attached with each other that it is not possible to increase the growth of one sector sector without the improvement of the other sector. If agriculture is considered as the ‘heart’ of the country, then obviously industry must be consider as the ‘brain’.

Impact of Agriculture on Industry

Impact of Industry on Agriculture

In national priority setting, the following recurring and emerging issues for sustainable agricultural development and poverty alleviation must be considered:

The Agriculture Policy document must articulate a clear vision on following few basic parameters of the agricultural sector around which a policy framework must be developed.

Yield of major crops and livestock in the region is much lower than that in the rest of the world. Considering that the frontiers of expansion of cultivated area are almost closed in the region, the future increase in food production to meet the continuing high demand must come from increase in yield. There is a need to strengthen adaptive research and technology assessment, refinement and transfer capabilities of the country so that the existing wide technology transfer gaps are bridged. For this, an appropriate network of extension service needs to be created to stimulate and encourage both top-down and bottom-up flows of information between farmers, extension workers, and research scientists to promote the generation, adoption, and evaluation of location specific farm technologies. Ample scope exists for increasing genetic yield potential of a large number of vegetables, fruits as well as other food crops and livestock and fisheries products. Besides maintenance breeding, greater effort should be made towards developing hybrid varieties as well as varieties suitable for export purposes. Agronomic and soil researches in the region need to be intensified to address location specific problems as factor productivity growth is decelerating in major production regimes. Research on coarse grains, pulses and oilseeds must achieve a production breakthrough. Hybrid rice, single cross hybrids of maize and pigeonpea hybrids offer new opportunities. Soybean, sunflower and oil palm will help in meeting future oil demands successfully. Forest cover must be preserved to keep off climatic disturbances and to provide enough of fuel and fodder. Milk, meat and draught capacity of our animals needs to be improved quickly through better management practices.

Attention should be given to balanced use of nutrients. Phosphorus deficiency is now the most widespread soil fertility problem in both irrigated and unirrigated areas. Correcting the distortion in relative prices of primary fertilizers could help correct the imbalances in the use of primary plant nutrients.

Public investment in irrigation, infrastructure development (road, electricity), research and extension and efficient use of water and plant nutrients are the dominant sources of TFP growth.

Vast untapped potential in the yield exists for all crops in most of the states accounting for more than three-fourths of crop area. Emphasis must be given to the states in which current yield levels are below the national average yield. Bihar, Orissa, Assam, West Bengal and Uttar Pradesh are the priority states accounting for 66% of rice area which need emphasis on bridging yield gaps to attain target demand and yield growth. For wheat we must focus mainly on Uttar Pradsh, Madhya Pradesh, Bihar and Rajasthan accounting for 68% of wheat area.

India will be required to produce more and more from less and less land and water resources. Alarming rates of ground water depletion and serious environmental and social problems of some of the major irrigation projects on one hand, and the multiple benefits of irrigation water in enhancing production and productivity, food security, poverty alleviation, as mentioned earlier, are well known to be further elaborated here: In India, water availability per capita was over 5000 cubic metres (m3 ) per annum in 1950. It now stands at around 2000 m3  and is projected to decline to 1500 m3  by 2025. Further, the quality of available water is deteriorating. Also, there are gross inequalities between basins and geographic regions.

Accent on Diversification of Agriculture and Value Addition

In the face of shrinking natural resources and ever increasing demand for larger food and agricultural production arising due to high population and income growths, agricultural intensification is the main course of future growth of agriculture in the region. Research for product diversification should be yet another important area. Besides developing technologies for promoting intensification, the country must give greater attention to the development of technologies that will facilitate agricultural diversification particularly towards intensive production of fruits, vegetables, flowers and other high value crops that are expected to increase income growth and generate effective demand for food.

Accent on Empowering the Small Farmers

Contributions of small holders in securing food for growing population have increased considerably even though they are most insecure and vulnerable group in the society. The off-farm and non-farm employment opportunities can play an important role. Against expectation under the liberalized scenario, the non-agricultural employment in rural areas has not improved. Greater emphasis needs to be placed on non-farm employment and appropriate budgetary allocations and rural credit through banking systems should be in place to promote appropriate rural enterprises. Specific human resource and skill development programmes to train them will make them better decision-makers and highly productive. Human resource development for increasing productivity of these small holders should get high priority. Thus, knowledge and skill development of rural people both in agriculture and non-agriculture sectors is essential for achieving economic and social goals. A careful balance will therefore need to be maintained between the agricultural and non-agricultural employment and farm and non-farm economy, as the two sectors are closely inter-connected.

During the Polam Pilusthondhi Programme, the main emphasis is being given on the following issues:

D-Krishi – a mobile based DBT solution for distribution of e-Seed& Micro Nutrients:

ü  About the Department of Agriculture: