Data Interpretation or DI refers to the implementation of procedures through which data is reviewed for the purpose of arriving at an inference. Data can be obtained from multiple sources e.g. data from running of industries, census population data etc. Interpreting data requires analyzing data to infer information from it in order to answer questions. Data can be provided in a number of formats viz: Bars, tables, line graphs, pie graphs.

In tables, data is described in the form of rows and columns. In DI table’s questions, we are required to read data from table/tables analyze the data and answer the questions asked on the basis of the given data.

DI Questions based on Tables are very common in competitive exams. Rows and Columns of tables consist of various types of data like income of company, expenditure on various items, and marks of Applicants and so on. First column and row of tables represent the titles. Level of Questions in Tables may be lower or higher in comparison of other graphs form, depending on given data in the table and the way,questions are framed.

A line graph basically is used to visualize values over a certain time period. It is basically used to change over time as various points of data connected by straight line on two axes. It helps to determine the relationship between two sets of values; and also one data set is always dependent on the other set. In many competitive exams, you will see various questions based on line chart problems, in which you are supposed to analyze the data and then answer them.

Pie charts are circular shaped graphs which are divided into sectors to represent numerical proportions. In a pie chart, the central angle of a particular sector is proportional to the quantity it represents. In other words, we can say a Pie Chart resembles a Pie in which a circle is cut in various sized sectors from center to the boundary. In simple words, the bigger the sector, the higher the proportion.

Imagine you just did a survey of your friends to find which kind of movie they liked best:

We can show that on a bar graph like this:

The formula to determine the angle of a sector in a circle graph is:

Imagine you survey your friends to find the kind of movie they like best:

You can show the data by this Pie Chart:

It is a really good way to show relative sizes: it is easy to see which movie types are most liked, and which are least liked, at a glance.

Next, divide each value by the total and multiply by 100 to get a percent:

Now to figure out how many degrees for each “pie slice” (correctly called a sector).  A Full Circle has 360 degrees, so we do this calculation:

Let X1, X2, …, Xn be a random sample from a probability distribution with unknown parameter θ. Then, the statistic:

is said to be sufficient for θ if the conditional distribution of X1, X2, …, Xn, given the statistic Y, does not depend on the parameter θ.

Question: In which year was Rahul born ?

The illustration is a pie graph depicting the results of a final exam given to a hypothetical class of students.Each grade is denoted by a “slice.”The total of the percentages is equal to 100 (this is important; if it were not, the accuracy of the graph would be suspect).The total of the arc measures is equal to 360 degrees.

From this graph, one might gather that the professor for this course was not especially lenient nor severe.It is evident that grading was not done on a “pure curve” (in which case all the arcs would have equal measures of 72 degrees, corresponding to 20%).If this graph were compared with those of classes from other years that received the same test from the same professor, some conclusions might be drawn about intelligence changes among students over the years.If this graph were compared with those of other classes in the same semester who had received the same final exam but who had taken the course from different professors, one might draw conclusions about the relative competence and/or grading whims of the professors.

Imagine you survey your friends to find the kind of movie they like best:

Pie chart representation of above table 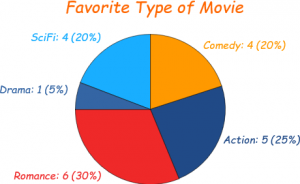 Probability is simply how likely something is to happen.

Whenever we’re unsure about the outcome of an event, we can talk about the probabilities of certain outcomes—how likely they are. The analysis of events governed by probability is called statistics.

When a coin is tossed, there are two possible outcomes:

The probability of any one of them is  16

Number of ways it can happen