Conscience as a source of ethics

Conscience is an aptitude, faculty, intuition or judgment that assists in distinguishing right from wrong. Moral judgment may derive from values or norms (principles and rules). In psychological terms conscience is often described as leading to feelings of remorse when a human commits actions that go against his/her moral values and to feelings of rectitude or integrity when actions conform to such norms. The extent to which conscience informs moral judgment before an action and whether such moral judgments are or should be based in reason has occasioned debate through much of the history of Western philosophy. Religious views of conscience usually see it as linked to a morality inherent in all humans, to a beneficent universe and/or to divinity. The diverse ritualistic, mythical, doctrinal, legal, institutional and material features of religion may not necessarily cohere with experiential, emotive, spiritual or contemplative considerations about the origin and operation of conscience. Common secular or scientific views regard the capacity for conscience as probably genetically determined, with its subject probably learned or imprinted (like language) as part of a culture.  Commonly used metaphors for conscience include the “voice within”, the “inner light”,or even Socrates’ reliance on what the Greeks called his “daimōnic sign”, an averting inner voice heard only when he was about to make a mistake. Conscience, as is detailed in sections below, is a concept in national and international law, is increasingly conceived of as applying to the world as a whole, has motivated numerous notable acts for the public good and been the subject of many prominent examples of literature, music and film. 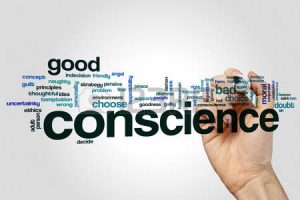 Benedict de Spinoza in his Ethics, , argued that most people, even those that consider themselves to exercise free will, make moral decisions on the basis of imperfect sensory information, inadequate understanding of their mind and will, as well as emotions which are both outcomes of their contingent physical existence and forms of thought defective from being chiefly impelled by self-preservation. The solution, according to Spinoza, was to gradually increase the capacity of our reason to change the forms of thought produced by emotions and to fall in love with viewing problems requiring moral decision from the perspective of eternity. Thus, living a life of peaceful conscience means to Spinoza that reason is used to generate adequate ideas where the mind increasingly sees the world and its conflicts, our desires and passions sub specie aeternitatis, that is without reference to time. Hegel’s obscure and mystical Philosophy of Mind held that the absolute right of freedom of conscience facilitates human understanding of an all-embracing unity, an absolute which was rational, real and true.

Nevertheless, Hegel thought that a functioning State would always be tempted not to recognize conscience in its form of subjective knowledge, just as similar non-objective opinions are generally rejected in science. A similar idealist notion was expressed in the writings of Joseph Butler who argued that conscience is God-given, should always be obeyed, is intuitive, and should be considered the “constitutional monarch” and the “universal moral faculty”: “conscience does not only offer itself to show us the way we should walk in, but it likewise carries its own authority with it.” Butler advanced ethical speculation by referring to a duality of regulative principles in human nature: first,”self-love” (seeking individual happiness) and second, “benevolence” (compassion and seeking good for another) in conscience (also linked to the agape of situational ethics). Conscience tended to be more authoritative in questions of moral judgment, thought Butler, because it was more likely to be clear and certain (whereas calculations of self-interest tended to probable and changing conclusions).John Selden in his Table Talk expressed the view that an awake but excessively scrupulous or ill-trained conscience could hinder resolve and practical action; it being “like a horse that is not well wayed, he starts at every bird that flies out of the hedge”.

Immanuel Kant, a central figure of the Age of Enlightenment, likewise claimed that two things filled his mind with ever new and increasing admiration and awe, the oftener and more steadily they were reflected on: “the starry heavens above me and the moral law within me … the latter begins from my invisible self, my personality, and exhibits me in a world which has true infinity but which I recognise myself as existing in a universal and necessary (and not only, as in the first case, contingent) connection.” The ‘universal connection’ referred to here is Kant’s categorical imperative: “act only according to that maxim by which you can at the same time will that it should become a universal law.” Kant considered critical conscience to be an internal court in which our thoughts accuse or excuse one another; he acknowledged that morally mature people do often describe contentment or peace in the soul after following conscience to perform a duty, but argued that for such acts to produce virtue their primary motivation should simply be duty, not expectation of any such bliss. Rousseau expressed a similar view that conscience somehow connected man to a greater metaphysical unity. John Plamenatz in his critical examination of Rousseau’s work considered that conscience was there defined as the feeling that urges us, in spite of contrary passions, towards two harmonies: the one within our minds and between our passions, and the other within society and between its members; “the weakest can appeal to it in the strongest, and the appeal, though often unsuccessful, is always disturbing. However, corrupted by power or wealth we may be, either as possessors of them or as victims, there is something in us serving to remind us that this corruption is against nature.

Conscientious acts and the law

English humanist lawyers in the 16th and 17th centuries interpreted conscience as a collection of universal principles given to man by god at creation to be applied by reason; this gradually reforming the medieval Roman law-based system with forms of action, written pleadings, use of juries and patterns of litigation such as Demurrer and Assumpsit that displayed an increased concern for elements of right and wrong on the actual facts. A conscience vote in a parliament allows legislators to vote without restrictions from any political party to which they may belong. In his trial in Jerusalem Nazi war criminal Adolf Eichmann claimed he was simply following legal orders under paragraph 48 of the German Military Code which provided: “punishability of an action or omission is not excused on the ground that the person considered his behaviour required by his conscience or the prescripts of his religion”. The United Nations Universal Declaration on Human Rights (UDHR) which is part of international customary law specifically refers to conscience in Articles 1 and 18. Likewise, the United Nations International Covenant on Civil and Political Rights (ICCPR) mentions conscience in Article 18.1.

All human beings are born free and equal in dignity and rights. They are endowed with reason and conscience and should act towards one another in a spirit of brotherhood  — United Nations, Universal Declaration on Human Rights Article 1

Everyone has the right to freedom of thought, conscience and religion; this right includes freedom to change his religion or belief, and freedom, either alone or in community with others and in public or private, to manifest his religion or belief in teaching, practice, worship and observance  — United Nations, Universal Declaration on Human Rights Article 18.

Everyone shall have the right to freedom of thought, conscience and religion. This right shall include freedom to have or to adopt a religion or belief of his choice, and freedom, either individually or in community with others and in public or private, to manifest his religion or belief in worship, observance, practice and teaching  — United Nations, International Covenant on Civil and Political Rights Article 18.1

Notable examples of modern acts based on conscience

In a notable contemporary act of conscience, Christian bushwalker Brenda Hean protested against the flooding of Lake Pedder despite threats and that ultimately lead to her death. Another was the campaign by Ken Saro-Wiwa against oil extraction by multinational corporations in Nigeria that led to his execution. So too was the act by the Tank Man, or the Unknown Rebel photographed holding his shopping bag in the path of tanks during the protests at Beijing’s Tiananmen Square on 5 June 1989. The actions of United Nations Secretary General Dag Hammarskjöld to try and achieve peace in the Congo despite the (eventuating) threat to his life, were strongly motivated by conscience as is reflected in his diary, Vägmärken (Markings). Another example involved the actions of Warrant Officer Hugh Thompson, Jr to try and prevent the My Lai Massacre in the Vietnam War. Evan Pederick voluntarily confessed and was convicted of the Sydney Hilton bombing stating that his conscience could not tolerate the guilt and that “I guess I was quite unique in the prison system in that I had to keep proving my guilt, whereas everyone else said they were innocent.” Vasili Arkhipov was a Russian naval officer on out-of-radio-contact Soviet submarine B-59 being depth-charged by US warships during the Cuban Missile Crisis whose dissent when two other officers decided to launch a nuclear torpedo (unanimous agreement to launch was required) may have averted a nuclear war. In 1963 Buddhist monk Thich Quang Duc performed a famous act of self-immolation to protest against alleged persecution of his faith by the Vietnamese Ngo Dinh Diem regime.