The criterion of social development, according to most of the Western social philosophers, is the moral progress in the individuals and society. Thus ethics has been considered as the most potent method of social development.   This contention, to be fully verified and examined, requires a two-fold inquiry. First, what is that standard of morality which is the wisest and hence the widest and most comprehensive?

Such a theory of moral standard will, obviously, harmonize and integrate all other theories, show their limitations and weld them into a more perfect theory. Secondly, does moral progress realize an integral evolution of man and society?

As this is the aim of social development, the social philosopher will find out the true nature of ethics, its highest standard and its value but he will also see its value for the achievement of the ideal of social development.  Find out its limitations, if there are any, and suggest other methods which might be an improvement upon it Sri Aurobindo examines various standards of morality, presents a standard at once integrating and transcending others, assesses the value of moral progress in social development, shows its limitations and finally indicates how religion and Yoga are an advance upon the ethical method.

The basic fallacy underlying the different theories of ethics is the same as it is in the theories of psychology, metaphysics and religion all these are vitiated by the defect of abstraction.

Theories of ethics, psychology and metaphysics have been generally built upon the truths of some one aspect of man’s being, on the truth of the individual, in isolation from society and vice versa, and on similar other abstractions.  But as Sri Aurobindo points out, “The ethical being escapes from all these formulas; it is a law to itself and finds its principle in its own eternal nature which is not in its essential character a growth of evolving mind, even though it may seem to be that in its earthly history, but a light from the ideal, a reflection in man of the Divine.”  Morality, religion, science, metaphysics, all should seek the development of the whole man, not isolated from but in and through society. This is the aim of all the efforts of man.

Thus the ultimate end, according to the moral philosophy of Sri Aurobindo, is God-Realization. This is the criterion of good and right “All takes new values not from itself but from die consciousness that uses it; for there is only one thing essential, needful, indispensable, to grow conscious of the Divine Reality and live hi it and live it always.’ 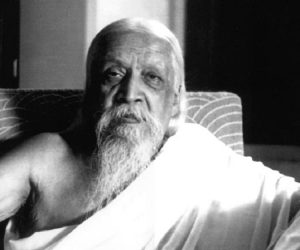 This is a principle on which Indian sages have generally agreed. It is the real inner meaning of the ethics of self-realization as Sri Aurobindo points out, “The God is also, subjectively, the seeking for our highest, truest, fullest, and largest self.”

In the philosophy of Sri Aurobindo, man, world and God, are three forms of the same Reality, Existent, Conscious and Blissful to realize that Reality is the supreme end. Thus “good is all that helps the individual and die world towards their divine fullness and evil is all that retards or breaks up that increasing perfection?  These concepts of good and evil hi Sri Aurobindo’s ethics are dynamic since their aim is progressive and evolving in time. Hence no rigid rules of conduct can be framed. The temporality of the forms of moral conduct is quite compatible with the eternity of moral ideals.’

Ethics: A means to God realization

To him, “The Gita does not teach the disinterested performance of duties but the following of the divine life, the abandonment of all Dharmas, sarvadharman, to take refuge in the Supreme alone, and the divine activity of a Buddha, a Rama Krishna, a Vivekananda is perfectly in consonance with this teaching.  Thus, like the Gita, Sri Aurobindo strongly emphasizes the value of Kanna in life. There he agrees with Tilak, his closest associate in political activities. But he does not admit Kanna as an end in itself. The ideal man of Sri Aurobindo’s moral philosophy works neither for himself nor for society, nor event for Duty itself but for God, as an instrument hi His hand.