Agriculture is the largest area of occupation in Madhya Pradesh. Around 1/5th of the cultivated land is under irrigation. The major food crops here include, jowar, wheat, rice and gram. Among the other crops, the oilseeds, cotton and sugarcane are some of those that need a mention. 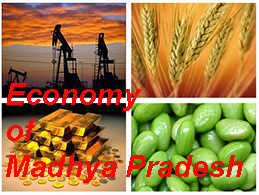 Talking about the first aspect of the economy of Madhya Pradesh, it can be mention that Madhya Pradesh is an agricultural state where the main occupation of the people is agriculture. In spite of the growth of industries, agriculture is moving steadily in the economic backdrop of the state.

Some of the important crops that are vital to agriculture in Madhya Pradesh are follows, along with a study of their average production (in kilogram per hectare):

In Madhya Pradesh, about 49% of the land is cultivable, i.e. majority of the land surface is favourable for cultivation. The following data would further sort all queries regarding utilization of land in Madhya Pradesh for agriculture (according to a 2003-2004 survey):

Pre-bifurcation Madhya Pradesh contained vast mineral deposits and the scope of mining was immense. However when the state was divided in 2002, deposits of minerals like Iron ore, Tin ore, Corundum, Coal, Limestone, Dolomite and Bauxite passed over to Chhattisgarh. So it became imperative to introduce a new mining policy to mark formerly unidentified mineral deposits and ensure mining takes place scientifically to maintain environmental balance.

The state has rich granaries of food. In the northern part sillimanite and ochre are excavated. Other natural products are steatite and China clay. There are many flourishing textile mills in the state and artificial silk manufacturing plants located at Ujjain, Nagda, Indore and Gwalior. In the public sector, huge plants, namely the Bhilai Steel plant, the Heavy Electrical and the Bailadilla are the major achievements.

The Nepa Mills produces newsprint for the country. Diesel engines are manufactured at Indore and attractive pottery and carpets are produced at Gwalior. \

The latter two are included in India’s finest game sanctuaries. Buddhist stupa of Sanchi and 15th-16th century citadels of Mandu in the southwestern part of Madhya Pradesh are worth visiting.Madhya Pradesh tourism offers a lineage of cultural heritage of Hinduism, Buddhism, Jainism, and Islam. Spectacular monuments, temples, stupas, forts and palaces are spread all over the state. Madhya Pradesh has enormous mountain ranges, meandering rivers and stretches of dense forests which offer a variety of wildlife in sylvan surroundings.

The stoneworks of the place bear the history of empires, warriors, and philosophers. The giant fort of Gwalior evokes memories of a momentous past. The series of temples and forts of Orchha has a medieval touch. Mandu bears testimony of the time when the Afghans marched in and crafted its stones. At Khajuraho, poetry is created on stone by the warrior race of Chandella Rajputs. The oldest Buddhist shrines at Sanchi reflect the glory of Ashokan times.