Natural hazards and other related aspects of Madhya Pradesh

Vulnerability of the State

It has been observed during the last few decades that the State of Madhya Pradesh is prone to various kinds of disasters of recurrent nature. These disasters result in loss of life and property – public and private – and disrupt economic activity, besides causing immense misery and hardship to the affected population. It is felt that much of this is avoidable, or /and could be prevented and mitigated. A time has come to look at the disasters occurring in one or more parts of the State regularly, at more frequent intervals and to evolve a strategy for reducing their impact, and for giving assistance to the affected population. A timely and wellprepared action plan can save many lives and lots of property even at the time of sudden occurrence of a disaster, as the entire administrative machinery, and the community can be geared to the execution of a well laid out plan of action. 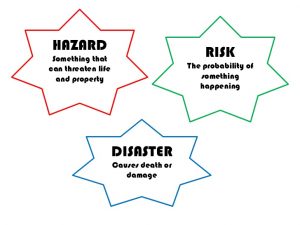 Disasters are of many types. The High Powered Committee (HPC) constituted by the Central Government has identified thirty-one disasters and grouped them in five categories. On the basis of available, data disasters frequently occurring in the State are as follows:

With its vast expanse, geographical features and varying climate conditions, different parts of the State have been perennially prone to drought conditions. Many districts of Madhya Pradesh have been facing a drought situation repeatedly every year. During 2007-08, 39 out of 50 districts (165 Tehsils and one cluster) of Madhya Pradesh have been declared as drought affected. The State has faced drought in the nine out of last ten years. Though irrigated area has increased substantially in the State, yet production in almost 70% agriculture area remains highly dependent on rainfall. Around 7 districts are highly affected from drought.

In the year 2005, 10 districts and in year 2006 about 27 districts were affected by flood. In last 26 years there are 32 districts of the State affected from the flood.

12 Hailstorms occur rather frequently in M.P., but fortunately mostly in small pockets at a time. They happen in one or another part of M.P. almost every year. They damage the crops resulting in loss of income to the farmers. To mitigate the loss, farmers will be encouraged to rely on comprehensive crop insurance policies.

Accidental fires are common in rural areas especially during the post harvest season. In urban areas, fires are increasing phenomena in high rise buildings, and in industrial and commercial areas. Public places such as cinema halls, auditoriums, exhibition areas, pandals, schools etc. have, in recent years, witnessed serious fires resulting in huge loss of human life and property. Forest and mine fires are common in the state.

The Authority has the mandate not only to take up the mitigation activities but also the relief, restoration, reconstruction and other measures. These activities cover the entire gamot of disaster management including preparedness activities: