Seed is the true carrier of technology. In India, three sets of institutions produce seeds:research institutions and agricultural universities; public sector seed producing corporations; andprivate sector firms including multinationals. The last decade has seen two main developmentsin seed market. One, production of quality seed has risen at a rapid rate after 2005-06. And two,public sector has begun to effectively compete with the private sector.

Beginning with 2001-02, there has been a distinct change in the role of public sector inthe development of hybrid in all crops.While these changes have led to better availability of quality seed, seed replacement rate(percentage of area sown using certified quality seeds other than the farm saved seeds from theprevious crop) remains low in the country. On average, it is below 20 per cent in pulses and
below 30 per cent in paddy and wheat. Even now many farmers do not distinguish betweencommon grain and seed and use common grain as seed.3 Recent data on breeder seed productionindicated a drastic reduction of about 40% compared 2010-11. This is likely to impact thecertified seed availability in coming years. Another serious factor responsible for low use ofquality seed is sale of spurious seed in the market. In order to raise productivity there is a need tosupply and promote use of quality seed and also assure quality.

Some important initiatives have been taken under the recently amended New Policy onSeed Development. The policy permits 100 per cent foreign direct investment under theautomatic route and simplifies the procedure for inclusion of new varieties in the Organisationfor Economic Cooperation and Development Seeds Scheme. The thrust is also on creating a seedbank. Since 2013-14, a Seed Rolling Plan has been in place for all the States for identification ofgood seed varieties and agencies responsible for production of seeds.

Several steps need to be taken to improve the quality of seeds used by farmers:
 Sometimes prices of good quality seeds, especially hybrids, are high and farmersare unable to afford them. Creating community Seed Banks in producing areascan reduce dependence on market for seeds. The seed banks not only protect theexisting crop varieties but also ensure supply of seeds to the farmer to meetcontingency.
 Proper storage of seeds is essential to get satisfactory germination. This factorassumes particular significance in the eastern region due to humid climaticconditions. Adequate-quality storage infrastructure according to agro-climateconditions and specific seeds to be stored, needs to be created to save the seedsfrom damage. 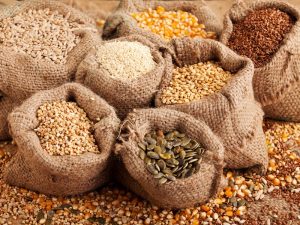  Huge demand supply gap exists in forage seed. The seed companies are notcoming forward for production of forage seeds. This is a major cause of concernfor development of dairy sector in the country. The seed companies and StateAgricultural Universities have to take-up forage seed production on a prioritybasis. In parallel, the dairy cooperatives should be encouraged to grow forage seeds.
 Regulatory measures for quality seed production have to be tightened so as todiscourage the sales of spurious seeds to farmers. The seed companies should bemade responsible for poor performance of seed supplied by them. The details ofseed traits should be displayed on seed packages and agency website. The seed companies should provide adequate compensation package for farmers in case ofgeneral failure of their seeds. Our research institutions must develop rapid testingkits for seed hybridity to allow quick seed testing, thus, enabling the detection ofspurious seeds at the time of sale.

Manure is organic matter used as fertilizer in agriculture. Manures improve the fertility of the soil by adding organic matter and lots of nutrients, such as nitrogen that is trapped by bacteria in the soil. Higher organisms then feed on the fungi and bacteria in a chain of life.

The use of organic manures (farmyard manure, compost, green manure, etc.) is the oldest and most widely practised means of nutrient replenishment in India. Prior to the 1950s, organic manures were almost the only sources of soil and plant nutrition. Owing to a high animal population, farmyard manure is the most common of the organic manures. Cattle account for 90 percent of total manure production. The proportion of cattle manure available for fertilizing purposes decreased from 70 percent in the early 1970s to 30 percent in the early 1990s. The use of farmyard manure is about 2 tonnes/ha, which is much below the desired rate of 10 tonnes/ha.

The Government is promoting the concept of the integrated nutrient supply system (INSS), i.e. the combined use of mineral fertilizers, organic manures and biofertilizers. Farmers are also aware of the advantage of INSS in improving soil health and crop productivity. However, the adoption of INSS is limited by the following constraints: