Contribution of Indians in science and technology

This list of Indian inventions and discoveries details the inventions, scientific discoveries and contributions of ancient and modern India, including both the ancient and medieval nations in the subcontinent historically referred to as India and the modern Indian state. It draws from the whole cultural and technological history of India, during which architecture, astronomy, cartography, metallurgy, logic, mathematics, metrology and mineralogy were among the branches of study pursued by its scholars. During recent times science and technology in the Republic of India has also focused on automobile engineering, information technology, communications as well as research into space and polar technology.

Iron pillar of Delhi:The world’s first iron pillar was the Iron pillar of Delhi—erected at the time of Chandragupta II Vikramaditya (375–413). The pillar has attracted attention of archaeologists and materials scientists and has been called “a testament to the skill of ancient Indian blacksmiths” because of its high resistance to corrosion.

Stepwell: Earliest clear evidence of the origins of the stepwell is found in the Indus Valley Civilization’s archaeological site at Mohenjodaro in Pakistan and Dholavira in India. The three features of stepwells in the subcontinent are evident from one particular site, abandoned by 2500 BCE, which combines a bathing pool, steps leading down to water, and figures of some religious importance into one structure.The early centuries immediately before the common era saw the Buddhists and the Jains of India adapt the stepwells into their architecture. Both the wells and the form of ritual bathing reached other parts of the world with Buddhism. Rock-cut step wells in the subcontinent date from 200 to 400 CE. Subsequently, the wells at Dhank (550-625 CE) and stepped ponds at Bhinmal (850-950 CE) were constructed.

Stupa: The origin of the stupa can be traced to 3rd-century BCE India. It was used as a commemorative monument associated with storing sacred relics. The stupa architecture was adopted in Southeast and East Asia, where it evolved into the pagoda, a Buddhist monument used for enshrining sacred relics.

Rulers made from Ivory were in use by the Indus Valley Civilization in what today is Pakistan and Northwestern India prior to 1500 BCE. Excavations at Lothal (2400 BCE) have yielded one such ruler calibrated to about 1/16 of an inch—less than 2 millimeters. Ian Whitelaw (2007) holds that ‘The Mohenjodaro ruler is divided into units corresponding to 1.32 inches (33.5 mm) and these are marked out in decimal subdivisions with amazing accuracy—to within 0.005 of an inch. They correspond closely with the “hasta” increments of 1 3/8 inches traditionally used in South India in ancient architecture. Ancient bricks found throughout the region have dimensions that correspond to these units.’ Shigeo Iwata (2008) further writes ‘The minimum division of graduation found in the segment of an ivory-made linear measure excavated in Lothal was 1.79 mm (that corresponds to 1/940 of a fathom), while that of the fragment of a shell-made one from Mohenjodaro was 6.72 mm (1/250 of a fathom), and that of bronze-made one from Harappa was 9.33 mm (1/180 of a fathom).’ The weights and measures of the Indus civilization also reached Persia and Central Asia, where they were further modified.

J Sharp: Visual J# (pronounced “jay-sharp”) programming language was a transitional language for programmers of Java and Visual J++ languages, so they could use their existing knowledge and applications on .NET Framework. It 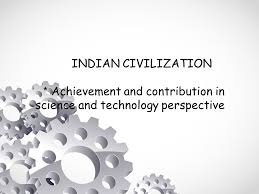 was developed by the Hyderabad-based Microsoft India Development Center at HITEC City in India.

Plough: The earliest known instance of a ploughed field was found at Kalibangan  Carbon pigment: The source of the carbon pigment used in India ink was India. In India, the carbon black from which India ink is produced is obtained by burning bones, tar, pitch, and other substances. Ink itself has been used in India since at least the 4th century BCE. Masi, an early ink in India was an admixture of several chemical components. Indian documents written in Kharosthi with ink have been unearthed in Xinjiang. The practice of writing with ink and a sharp pointed needle was common in ancient South India. Several Jain sutras in India were compiled in ink.

Iron and mercury coherer: In 1899, the Bengali physicist Sir Jagdish Chandra Bose announced the development of an “iron-mercury-iron coherer with telephone detector” in a paper presented at the Royal Society, London. He also later received U.S. Patent 755,840, “Detector for electrical disturbances” (1904), for a specific electromagnetic receiver.

Microwave Communication: The first public demonstration of microwave transmission was made by Jagadish Chandra Bose, in Calcutta, in 1895, two years before a similar demonstration by Marconi in England, and just a year after Oliver Lodge’s commemorative lecture on Radio communication, following Hertz’s death. Bose’s revolutionary demonstration forms the foundation of the technology used in mobile telephony, radars, satellite communication, radios, television broadcast, WiFi, remote controls and countless other applications.

Mysorean rockets: The first iron-cased and metal-cylinder rockets were developed by Tipu Sultan, ruler of the South Indian Kingdom of Mysore, and his father Haither Ali, in the 1780s. He successfully used these iron-cased rockets against the larger forces of the British East India Company during the Anglo-Mysore Wars. The Mysore Rockets of this period were much more advanced than what the British had seen, chiefly because of the use of iron tubes for holding the propellant; this enabled higher thrust and longer range for the missile (up to 2 km range). After Tipu’s eventual defeat in the Fourth Anglo-Mysore War and the capture of the Mysore iron rockets, they were influential in British rocket development, inspiring the Congreve rocket, and were soon put into use in the Napoleonic Wars.

Reversible inhibition of sperm under guidance: RISUG, formerly referred to as the synthetic polymer styrene maleic anhydride (SMA), is the development name of a male contraceptive injection developed at IIT Kharagpur in India by the team of Dr. Sujoy K Guha. Phase III clinical trials are underway in India, slowed by insufficient volunteers. It has been patented in India, China, Bangladesh, and the United States. A method based on RISUG, Vasalgel, is currently under development in the US.

Pseudomonas putida: Indian (Bengali) inventor and microbiologist Ananda Mohan Chakrabarty created a species of man made micro organism to break down crude oil. He genetically engineered a new species of Pseudomonas bacteria (“the oil-eating bacteria”) in 1971. United States Supreme Court granted Chakrabarty’s invention patent even though it was a living species. The court ruling decreed that Chakrabarty’s discovery was “not nature’s handiwork, but his own…” The inventor Chakrabarty secured his patent in 1980.