We are in a digital era. It is difficult to think of any event in our daily life that is not using Information and Communication Technology. Our schools and classrooms are no exceptions. This course is meant for introducing you with these technologies with the intension that you meaningfully integrate technology in your practices related to teaching and learning.

As an ordinary citizen as well as a teacher, you handle enormous data all the time. Data refers to facts, events, activities and transactions which have been recorded. Data is the raw material from which information is produced. Number of boys and girls in your class is a factual description of your classroom. This is an example of data related to the students in the class. In this sense, data is a description of the world. Information is making meaning from the data. Based on the data, you can conclude if girls are more in number in your class. This conclusion is information. In other words, information is processed data. Most of the decisions taken in and around the world by and large are based on the data and information. Information is the key guiding force of the world today.

For a wider use of the information, the information must be communicated to people. It is only when the information reaches the intended audience, the purpose of creation of information as well as its communication would be served .  Let us take an example. As a teacher, you are organizing a teacher parent meeting. Details of the same need to be communicated to the concerned parents. This should happen within a time frame. As you know, it is neither easy to physically reach every parent within a given time, nor desired. With the availability of technology, it is possible that a teacher now not only can reach the parents but also interact with them in real time. A simple WhatsApp group would serve this purpose. This is only an illustration to say how technology has simplified many complexities of our life. 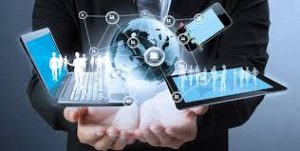 Traditionally also radio, television, and print media were the widespread technologies used for communication. The digital revolution has changed the way these traditional technologies function. The analog television has become digital television. In addition to the printed newspaper we also have electronic versions. Along with traditional radio, we also have online radio. All these have started appearing in the classroom to make the learning experiences rich.

Components of an ICT system

ICT encompasses both the internet-enabled sphere as well as the mobile one powered by wireless networks. It also includes antiquated technologies, such as landline telephones, radio and television broadcast — all of which are still widely used today alongside cutting-edge ICT pieces such as artificial intelligence and robotics.

ICT is sometimes used synonymously with IT (for information technology); however, ICT is generally used to represent a broader, more comprehensive list of all components related to computer and digital technologies than IT.

The list of ICT components is exhaustive, and it continues to grow. Some components, such as computers and telephones, have existed for decades. Others, such as smartphones, digital TVs and robots, are more recent entries.

ICT commonly means more than its list of components, though. It also encompasses the application of all those various components. It’s here that the real potential, power and danger of ICT can be found.

ICT is leveraged for economic, societal and interpersonal transactions and interactions. ICT has drastically changed how people work, communicate, learn and live. Moreover, ICT continues to revolutionize all parts of the human experience as first computers and now robots do many of the tasks once handled by humans. For example, computers once answered phones and directed calls to the appropriate individuals to respond; now robots not only can answer the calls, but they can often more quickly and efficiently handle callers’ requests for services.

ICT’s importance to economic development and business growth has been so monumental, in fact, that it’s credited with ushering in what many have labeled the Fourth Industrial Revolution.

ICT also underpins broad shifts in society, as individuals en masse are moving from personal, face-to-face interactions to ones in the digital space. This new era is frequently termed the Digital Age.

For all its revolutionary aspects, though, ICT capabilities aren’t evenly distributed. Simply put, richer countries and richer individuals enjoy more access and thus have a greater ability to seize on the advantages and opportunities powered by ICT.

Consider, for example, some findings from the World Bank. In 2016, it stated that more than 75% of people worldwide have access to a cellphone. However, internet access through either mobile or fixed broadband remains prohibitively expensive in many countries due to a lack of ICT infrastructure. Furthermore, the World Bank estimated that out of the global population of 7.4 billion people, more than 4 billion don’t have access to the internet. Additionally, it estimated that only 1.1 billion people have access to high-speed internet.

The significance of ICT in enterprises

For businesses, advances within ICT have brought a slew of cost savings, opportunities and conveniences. They range from highly automated businesses processes that have cut costs, to the big data revolution where organizations are turning the vast trove of data generated by ICT into insights that drive new products and services, to ICT-enabled transactions such as internet shopping and telemedicine and social media that give customers more choices in how they shop, communicate and interact.

But ICT has also created problems and challenges to organizations and individuals alike — as well as to society as a whole. The digitization of data, the expanding use of high-speed internet and the growing global network together have led to new levels of crime, where so-called bad actors can hatch electronically enabled schemes or illegally gain access to systems to steal money, intellectual property or private information or to disrupt systems that control critical infrastructure. ICT has also brought automation and robots that displace workers who are unable to transfer their skills to new positions. And ICT has allowed more and more people to limit their interactions with others, creating what some people fear is a population that could lose some of what makes it human.