Alternative energy is any energy source that is an alternative to fossil fuel. These alternatives are intended to address concerns about such fossil fuels, such as its high carbon dioxide emissions, an important factor in global warming. Marine energy, hydroelectric, wind, geothermal and solar power are all alternative sources of energy.  The nature of what constitutes an alternative energy source has changed considerably over time, as have controversies regarding energy use. Because of the variety of energy choices and differing goals of their advocates, defining some energy types as “alternative” is considered very controversial.

Solar power, a clean renewable resource with zero emission, has got tremendous potential of energy which can be harnessed using a variety of devices. With recent developments, solar energy systems are easily available for industrial and domestic use with the added advantage of minimum maintenance. Solar energy could be made financially viable with government tax incentives and rebates.

An exclusive solar generation system of capacity of 250 to KWh units per month would cost around Rs. 5 Lacs, with present pricing and taxes. Most of the developed countries are switching over to solar energy as one of the prime renewable energy source. The current architectural designs make provision for photovoltaic cells and necessary circuitry while making building plans.

Wind power is one of the most efficient alternative energy sources. There has been good deal of development in wind turbine technology over the last decade with many new companies joining the fray. Wind turbines have become larger, efficiencies and availabilities have improved and wind farm concept has become popular. It could be combined with solar, especially for a total self-sustainability project.  The economics of wind energy is already strong, despite the relative immaturity of the industry. The downward trend in wind energy costs is predicted to continue. As the world market in wind turbines continues to boom, wind turbine prices will continue to fall. India now ranks as a “wind superpower” having a net potential of about 45000 MW only from 13 identified states. 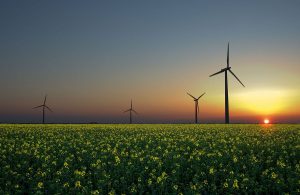 In October 2010, India drew up a plan to reach a nuclear power capacity of 63 GW in 2032, but after the 2011 Fukushima nuclear disaster in Japan people around proposed Indian nuclear power plant sites have launched protests, raising questions about atomic energy as a clean and safe alternative to fossil fuels. There have been mass protests against the French-backed 9,900 MW Jaitapur Nuclear Power Project in Maharashtra and the Russian-backed 2,000 MW Kudankulam Nuclear Power Plant in Tamil Nadu. The state government of West Bengal state has also refused permission to a proposed 6,000 MW facility near the town of Haripur that intended to host six Russian reactors. A Public Interest Litigation (PIL) has also been filed against the government’s civil nuclear programme at the Supreme Court.

India has been making advances in the field of thorium-based fuels, working to design and develop a prototype for an atomic reactor using thorium and low-enriched uranium, a key part of India’s three stage nuclear power programme.The country has also recently re-initiated its involvement in the LENR research activities, in addition to supporting work done in the fusion power area through the ITER initiative.

India has a huge hydro power potential, out of which around 20 % has been realized so far. New hydro projects are facing serious resistance from environmentalists. Resettlement of the displaced people with their lands becomes major issue.

Biomass Energy Biomass energy can play a major role in reducing India’s reliance on fossil fuels by making use of thermo-chemical conversion technologies. In addition, the increased utilization of biomass-based fuels will be instrumental in safeguarding the environment, creating new job opportunities, sustainable development and health improvements in rural areas. Biomass energy could also aid in modernizing the agricultural economy. A large amount of energy is expended in the cultivation and processing of crops like sugarcane, food grains, vegetables and fruits which can be recovered by utilizing energy-rich residues for energy production. The integration of biomass-fuelled gasifies and coal-fired energy generation would be advantageous in terms of improved flexibility in response to fluctuations in biomass availability with lower investment costs.  Waste-to-energy plants offer two important benefits of environmentally sound waste management and disposal, as well as the generation of clean electric power. Waste-to-energy facilities produce clean, renewable energy through thermochemical, biochemical and physicochemical methods. Moreover, waste-to-energy plants are highly efficient in harnessing the untapped sources of energy from a variety of wastes.

Microgeneration, also called “micropower”, is the generation of zero or low-carbon electrical power by individuals, small businesses and communities to meet their own needs. The most widely-used microgeneration technologies include small wind turbines, solar power photovoltaic or biomass conversion systems that have been promoted for decades as alternative sources of renewable energy. Because of technological advances, microgeneration now includes handheld solar and wind-power recharging devices for personal electronics, as well as advanced photovoltaic, biomass and wind-turbine systems for domestic and industrial power generation.

Traditional “megapower” production of electricity is insufficient today because of exponential industrial growth and high living standard. Microgeneration can act as a catalyst for cultural changes in consumer attitude, and provides evidence of the important impact that microgeneration has on consumers’ attitude and behavior regarding energy production and use. Microgeneration is both a serious form of clean energy production and also a cultural movement that is gathering momentum worldwide. Microgeneration technologies include small wind turbines, biomass gasifiers, solar power, micro-hydro, or a combination of these technologies. Prima-facie renewable energy may appear a bit costlier than the conventional source of energy, but looking at the benefit of continuous power availability and great contribution against global warming, it is worth.