Madhya Pradesh enacted the Panchayat Raj Adhiniyam, 1993 to establish the three level Panchayati Raj system in the State. It was the first state to hold elections after the 73rd amendment. In 2001, the Panchayati Raj Adhiniyam was amended by the Gram Swaraj Adhiniyam, which brought about significant changes in the structure of Panchayati Raj, by strengthening Gram Sabhas and directly constituting committees at the Gram Sabha level to plan and implement programmes. Recently, the law has been further amended to restore the position of the Gram Panchayat as the executive arm of self-government. It has been reported that Madhya Pradesh has decided to replace the separate village-level committees for development, education, health, infrastructure, security, agriculture, public property and social justice with two new committees the Gram Nirman Samiti and Gram Vikas Samiti, both chaired by the Sarpanch.

Madhya Pradesh has taken action to ensure the devolution of functionaries pertaining to 8 departments to Panchayats. As a first step, all village level functionaries of Class III and IV in Madhya Pradesh have been declared as ‘dying’ cadres. These include Panchayat Secretaries, primary school teachers, anganwadi workers etc. New appointments to the departments concerned in respect of vacancies caused by retirement, are made by Panchayats, thereby ensuring that progressively all such cadres would consist of staff appointed by Panchayats. 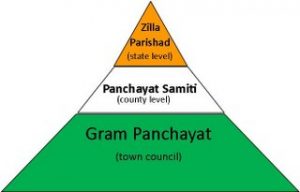 Establishment of a Panchayat Window in the State Budget

The State has established an arrangement for a Panchayat Sector Window in the budget. Each department identifies the Panchayat component of their department and indicates them localbody-wise in the state budget. These details are separately contained in Part C of the budget. It is reported that 22 departments have undertaken this exercise. These include Education, Women and Child Development, Rural Industries and Food and Civil Supplies. Therefore devolution of funds is not restricted to releases by the Panchayati Raj or Rural Development Department alone. However, the allocation of funds into the Panchayat sector window does not cover the entire gamut of activities devolved to the Panchayats. Thus, line departments continue to operate budget items that pertain to the functions devolved to Panchayats.

The State government has devolved grants to all three levels of Panchayats in accordance with the recommendations of the Tenth Finance Commission. This has been in the ratio of 3.45% to Zilla Panchayats, 8.04% to Janpad Panchayats and 88.52% to the Gram Panchayats.

The Government extensively amended the Panchayati Raj Adhiniyam through the Gram Swaraj Adhiniyam, to strengthen the Gram Sabha to perform not only functions of fixing accountability over the Panchayat, but also to make it an executive body, with separate standing committees entrusted with several functions. A new section was incorporated in the Act to make it mandatory for the Gram Panchayat to accept suggestions given by the Gram Sabha. The major powers and responsibilities of the Gram Sabha are as follows:

The Madhya Pradesh District Planning Committee Act was enacted in 1995 to review the plans prepared by the Panchayats and Urban Local Bodies and to prepare a consolidated development plan for the entire district. District Planning Committees (DPCs) were constituted in all 48 districts in 1999. The Minister in-charge is the chairperson of the DPC and the Collector is the Member Secretary. Guidelines have been issued for the functioning of DPCs. The DPCs meet once in every quarter.

It is to be ascertained whether the DPC prepares a consolidated draft district development plan. However, what is clear is that the District Planning Committee goes beyond its constitutional role to consolidate the plan and is empowered to plan and execute development works. Presently the DPC has the autonomy of using 30 per cent of resources that are being transferred to the district plan sector. It also integrates the plans of the Gram, Janpad and Zilla Panchayat level. It is ascertained that each Panchayat prepares annual plans, which are submitted to the DPC.

Since the State Government has constituted the district areas in order to make employment easily available, the resources available to the Panchayats may be assessed from their available limits and kinds. In compliance with sub-clause 3(b) of Article 243 ZD, NGOs have been providing necessary support to the Panchayats with the assistance of UNDP.

The Provisions of Panchayats (Extension to the Scheduled Areas) Act, 1996 (PESA)

Panchayats in PESA areas are not constituted on the basis of ethnic identities. They are constituted on the basis of population as in the non-PESA areas. In the scheduled areas, the Gram Sabha also consists of persons whose names are included on electoral rolls. But a large section of tribals reside in ‘forest villages’ (established as per Rule 11 of MP Forest Rules, 1960), who have not been included in electoral rolls and hence cannot vote and exercise their role under PESA.

Under the conformity legislation pertaining to Article 4 (i) of PESA, the State is enjoined to consult with Gram Sabha or Panchayats, prior to acquisition of land in scheduled areas for planning and implementing development projects, such as power stations, dams, industries, mines and canals.

No amendment has yet been made in MP Forest Rules to conform with Article 4 (m) Clause (ii) of PESA, enjoining the giving of ownership over minor forest produce to the Gram Sabha. Under Section 76 of Indian Forest Act, 1927, (applicable in MP too) concerning minor forest produce, these are still controlled and owned by the Department of Forest. Therefore, while the Gram Sabha is empowered to manage and control natural resources including forests, in the absence of conformity amendments in the Indian Forest Act, 1997, such powers largely remain on paper. Provision has been made for inclusion of Panchayat members in the Joint Forest Management (JFM) system, through Village Forest Committee (VFC)/Forest Protection Committee (FPC). But no adequate mechanism has been developed to give full control to the Village Panchayat or Gram Sabha for managing or using the forests or forest products.